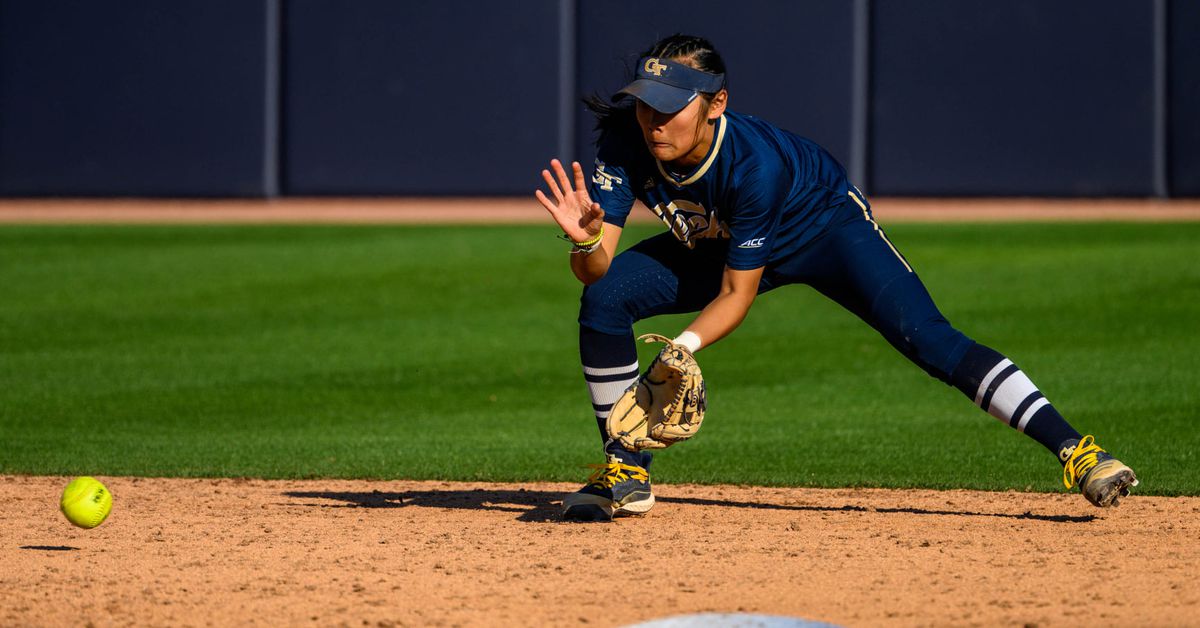 Yellow Jacket Roundup: And I would cycle 18 miles

ATLANTA, GEORGIA – I would cycle 18 miles, and I would cycle 18 more, just to be the man who cycled a bunch of miles to drop off at the gates of Mewborn Field. This is the second time I’ve walked across campus realizing I’ve timed the start of a softball game long enough to stay and watch live, rather than crashing on the apartment couch.

It ended up being a terrific decision, as it’s probably the most complete and lively atmosphere I’ve had the privilege of capturing live this year. Akshay and I used to draw parallels between the development of volleyball, women’s basketball and softball, but the large crowds of the year are perhaps the most obvious side effect in front of the fans of the most successful team over most of the decade.

Yours truly also visited a men’s tennis match this season, which not only shows how eventful the spring has been, but also a disappointment since the matches are rather lively and almost over for the year. In related news from Atlanta, the impending bad weather didn’t quite materialize over the holiday weekend, making Saturday in particular a great day to stroll over apartments, or around the city in its together, before the summer heat intensifies.

Alabama-Birmingham- [W] 5-3 (8): Tech’s Blake Neleman started the game in the circle, as she often does, and set up more than six solid three-run softball innings for Tech. Two of those points came in the opening leg, as the hosts were able to take a two-point lead. However, as the game got late, the Jackets were finally able to start stringing together productive plate appearances, with the deciding second and third innings coming from a brace from Emma Kauf as Tech was on her final outing. That third UAB run came late in the seventh, but that’s where they were stopped by Tech, who was able to push two runs top of the eighth when Bailee Zeitler exploded around the bases for a home run in the park. with Caroline Davis first. That’s ultimately all they wrote for the middle of the week.

NC status – [W] 3-0: Tech again split time in the circle between Neleman and Chandler Dennis, the latter getting the start in Friday’s opener. At plate, Auburn Dupree was a perfect 3-for-3, while Kauf went 2-for-2 with a double and a triple as Tech spread three runs over a pair of innings. The pitching team put up a valiant effort to keep the Wolfpack offense off the board, and it was a quick win for the Jackets in Game 1 of the doubleheader.

NC status – [W] 9-1 (6): In Game 2 on Friday, Tech put in his best performance of the weekend at the plate. Kauf continued his hot streak, going 3 for 3 and capping off a perfect day on the attacking side of the ball. Oddly for a game that ended by a run rule, NC State struck first with an early run. That day, Neleman ended up giving up just that one run on two hits, as Tech steadily added runs until a sixth-inning running rule decision was made on a Bailey hit. Chapin.

NC status – [W] 5-1: It was a solid game to watch, from a fan perspective. Solid running scoring options, good defense and pitching, and a growing lead made for a rowdy afternoon at the ballpark. Tech got on the board first with an impressive display of daring base-running since Dupree charged the bases after a manual bunt planted himself inches in front of the spot. The next force at home plate turned into an error, allowing the first run to score with the ball at the net. Tech added two more on another double from Kauf after that from Mallorie Black. NC State recovered one after Dupree narrowly missed what would have been a web gem of a catch, with the runner narrowly beating the throw in a second. Tech would add two insurance points late in the sixth, before Dennis quietly finished off the Wolfpack in the top of the seventh. The fly ball that Dupree gallantly caught against the wall would be Dennis’ only hit that day.

Tech allowed two runs this weekend and, as we’ve seen over the past few weeks, is playing its most impressive softball in years this season. This team deserves to be ranked and is doing a great job putting together one hell of a resume heading into the final two weeks of the regular season.

It was a tough weekend for the Jackets, who lost another heartbreaker 4-3 to Miami on Thursday before following up with another tough four-point loss to Florida State to close out the regular season. Tech’s first game against the No. 30 Hurricanes would ultimately result in their loss of points in doubles, despite a fierce struggle in singles. Tech’s Marcus McDaniel would quickly win on the second court, with Keshav Chopra and Chen Dong also being the day’s winners. In Game 2 of the weekend, things started out the same way, with Tech going down doubles and immediately following with a win for McDaniel. However, despite 5 wins in set one in singles, Tech would fail on all other courts, ending their regular season.

Tech also hosted Virginia Schools this weekend for their final booth of the season. In Game 1, Tech took care of business early and often against the Hokies, eventually winning the game decisively 7-0. The most interesting game of the weekend was the No. 8 Cavaliers who went to town for Senior Day on Sunday. Although Tech ultimately fell to another well-regarded foe in the ACC, the Jackets picked up a victory over the third court in doubles (Gia Cohen and Ruth Marsh), as well as two singles victories from Ava Hrastar and Mahak Jain on courts three and four en route to a 5-2 loss.

Tech headed west this weekend for the Auburn War Eagle Invitational. They were there for two days, and day two on Saturday definitely led the way in terms of finishes. A number of athletes have finished on the podium if only joined entries were counted – a weird quirk of collegiate athletics. However, among all athletes, Tech’s Olivia Moore and John Watkins finished third in the pole vault and triple jump, respectively, while Shanty Papakosta and Carla du Plessis finished second and third in the high jump. The winners of the weekend’s Tech event came in a 1,500 meter sweep of Mary Kathryn Knott and Charlie Smith, while Taylor Grimes won the 100 hurdles.

Georgia Tech Men’s and Women’s Volleyball headed to Phoenix for the NCVF Nationals tournament. The men were tied for 21st, while the women were tied for fifth in their competitive level. The results of the two teams can be seen below:

For the basketball cover:

For the baseball cover: