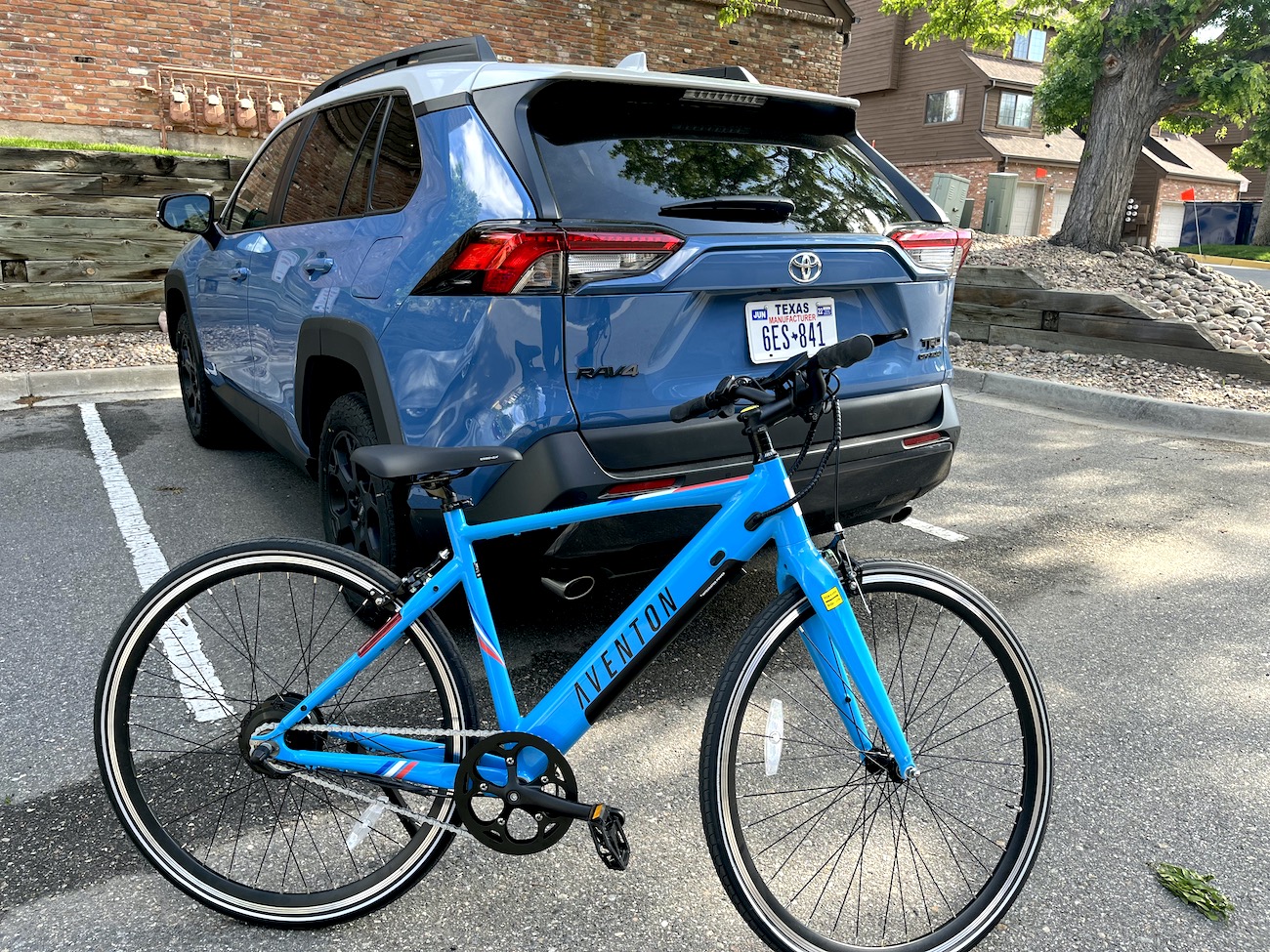 The 2022 Toyota RAV4 is a staple in the compact crossover segment and the TRD Off-Road version makes it a capable contender. We recently covered that the off-road-worthy trim level is great for tackling the outdoors, but some potential buyers may be curious what kind of functionality it brings to the table. As such, I decided to throw an e-bike in its cargo area just to see if it would fit.

Yes you can. In fact, there’s plenty of cargo space in the 2022 Toyota RAV4 and more. According Toyota, the RAV4 has up to 69.8 cubic feet of cargo volume with the rear seats folded down. Of course, that number doesn’t mean much on its own, but when compared to the 2022 Chevrolet Equinox’s 63.9 cubic feet, you can see the RAV4 is a lot roomier.

After stuffing my Aventon Solterra e-bike into the back of the RAV4, I noticed there was plenty of room for other little things around it. You can even store things like groceries or clothes behind the front seats if needed. There is even a space next to the rear seat cushion to wedge the handlebars so that the bike does not move. What’s even better is that the RAV4 TRD comes with an all-weather boot mat that also covers the rear seatbacks, so you don’t have to worry about scratches.

How does the RAV4’s cargo area compare to the Honda CR-V and Chevy Equinox?

The RAV4’s cargo space compares well to its competitors. If you’re shopping for a compact crossover, you’re probably comparing the 2022 RAV4 to rivals like the Honda CR-V and Chevy Equinox. I did the same load test using the same bike with the 2022 Chevrolet Equinox and it did just as well. This was surprising given that the Equinox’s cargo area measures 63.9 cubic feet compared to 69.8 for the RAV4.

What about the 2022 Honda CR-V? It’s actually the largest among the three crossovers. Honda’s best-selling SUV has a cargo area that measures a whopping 75.8 cubic feet. That’s definitely more than enough room for a mid-size bike, if not bigger. However, if you plan on carrying more than one bike, you may want to get either a trunk-mounted rack or a roof rack.

The Toyota RAV4 also has plenty of other storage space

Although the RAV4 is considered “compact”, it does not lack useful space for all your belongings, large or small. Additionally, the rear seatback is split 60/40, allowing it to accommodate a rear passenger while carrying larger or longer items in the cargo area. Whichever configuration you choose to use, there’s no denying that the RAV4 can hold almost anything you put in it, even a mountain bike.

RELATED: The Off-Road 2022 Toyota RAV4 TRD Is More Capable Than You…

Unicyclist puts smiles on hundreds of faces – The Durango Herald