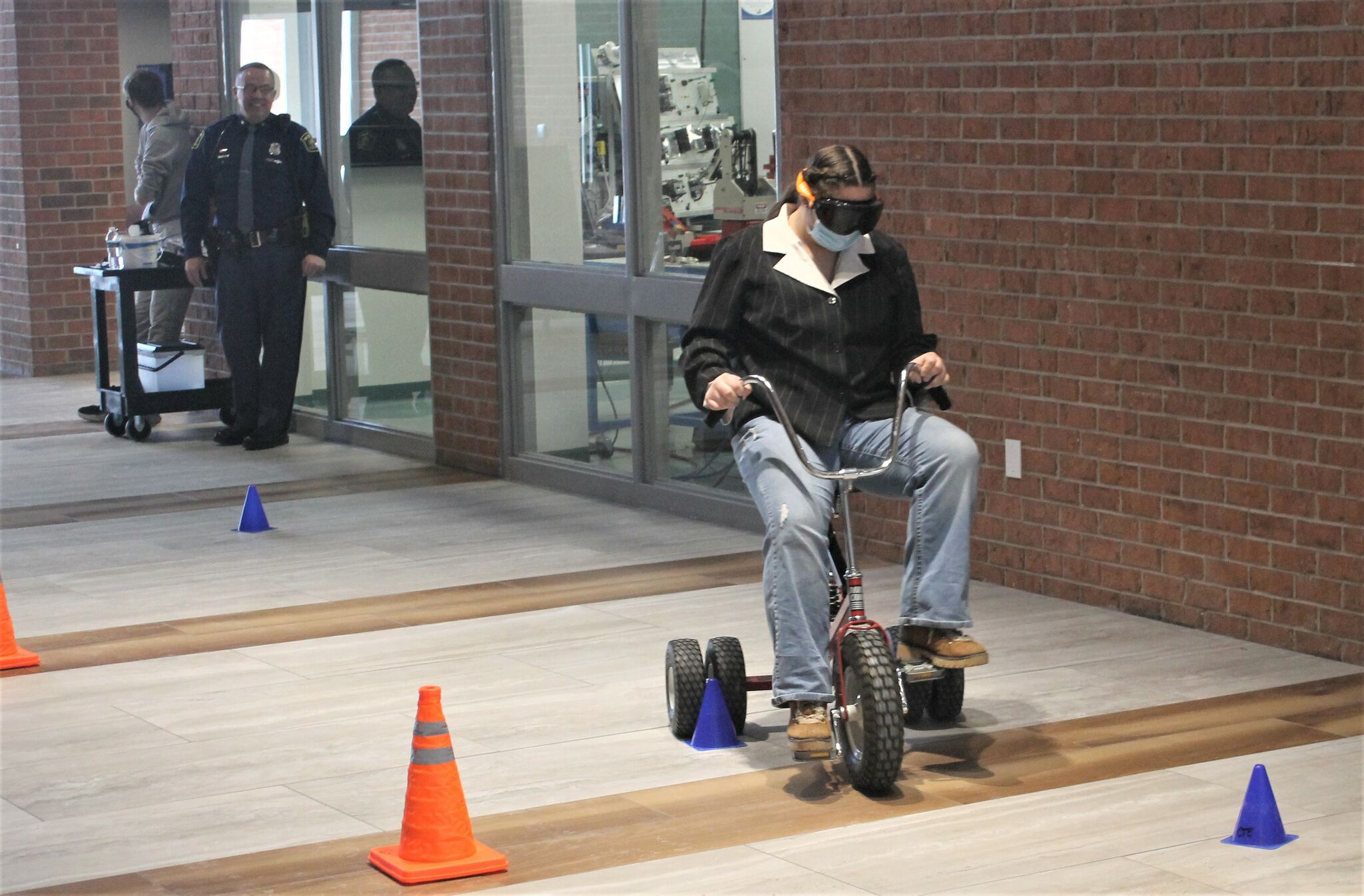 SCOTTVILLE — According to the Michigan Traffic Crash Facts website, 1,235 cyclists were involved in motor vehicle crashes in Michigan in 2020.

Criminal justice students at the West Shore Educational Service District Career and Technical Education Center have worked hard to educate their peers in an effort to reduce that number as they compete in the annual Strive 4 a Safer Drive competition.

“Our campaign mission this year is about bike safety,” said Wesley Stream, student leader for S4SD. “Our slogan is: ‘Don’t be crazy, protect your brain.'”

“We’ve done more this year than previous years, so we’re really pleased with the end result. We’ve had booths at some basketball games and we’re actually having a coloring contest next week with our students from special education primary,” she said. “We’re going to Custer, Ludington, and Hart for that. We’re going to give two students completely rigged bikes and helmets. It’s quite exciting.”

“Ford Driving Skills for Life, their whole mission is to make sure our kids are safe on the road. They invest so much,” Gregory said. “…It’s so great to see because they care so much about the community. They care about the kids, and it’s this huge corporation. All that money comes from the Ford Fund, where they do all their work charity. It’s just amazing what they’re doing.”

Stream said participating schools could choose which issue their campaigns would address.

“S4SD gives us a list of themes every year that we can base our campaign on. This year we just chose bike safety,” he said. “…Each year we did something different. Bike safety was a completely new topic this year, so we decided to give it a shot.”

On Tuesday, criminal justice students set up shop at the West Shore Community College Tech Center to educate vocational tech students from surrounding high schools on the importance of bike safety and road awareness with games, brochures, demonstrations and more.

“It’s our main event here. We have a lot of activities – we try to get everyone involved,” said criminal justice student Jesus Santillan. “Everyone here, we try to make them feel like they’re learning something new. … We really worked hard on that. My teacher, Miss Gregory was a good influence – she helped me a lot to do .. It’s nice to go out and meet people.”

Gregory said Stream went above and beyond as the campaign’s student leader. She said it was special to see so much dedication from someone who isn’t considering going into criminal justice. Stream plans to study music.

“He just cares about his community,” Gregory said.

Stream said Tuesday’s event was just one of many ways the West Shore ESD team reached out to other students.

“We’re also going to have booths at high school basketball games, a family event at Mason County Central High School and we once had (a booth) at a basketball game there. We’re also going to go at West ESD Course ashore and we’re going to do a little presentation for the kids there,” he said. “…We distribute our brochures at all our events – they contain information on bicycle safety. We have our website and our social networks. Our billboard we had on US 10 just got taken down, but we had it up there for a month.”

West Shore ESD Criminal Justice Students had planned to have a booth at the Manistee boys’ basketball game on February 11, but the game was canceled due to a snowy day. Gregory said they were hoping to reschedule.

West Shore ESD CTE students have won the S4SD competition in 2018, 2019, and 2021. The competition could not be completed in 2020 due to schools closing for in-person study in March of that year.

“We will probably scale back a bit next year,” Gregory said. “I said after three wins we’ll let someone else win, but we have to keep going. It’s just gotten so big. It’s like, OK, we have to contain it a bit.”

Each school participating in the S4SD competition will be able to send students to a Ride and Drive event at Ford’s proving grounds in Romeo. Students learn hazard recognition, vehicle operation, speed and space management, and participate in distracted and impaired driving simulations.

“It’s the best thing. I can’t even imagine how much money Ford is putting into this because it’s huge,” Gregory said. “…The first time we went there, I hadn’t realized what they were doing and how much they had invested in it.”

38 schools are participating in the S4SD campaign this year. Gregory said more than 60 schools participated before the coronavirus pandemic.

“I wish more schools would get involved because it’s such a great project for kids. It’s a lot of work, but it’s a great experience,” she said.

“…They get so many valuable skills that you wouldn’t normally get. Few kids can graduate from high school and say, ‘Hey, I wrote a scholarship and we won.’ It just doesn’t happen. It’s great what you can do with it, and they have a lot of fun. It’s great,” Gregory said.

To visit cjs4sd.wixsite.com/s4sdcj for more information.

DoorDash Shares Rise in Revenue and Stands Out Among Pandemic Darlings