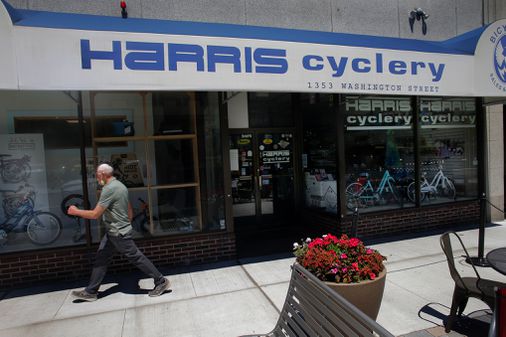 ‘We had tears in our eyes’: West Newton bicycle shop closes after 70 years

“We were trying to be the best that we could, and we were,” said Harris. “The people entering were the funniest in the world.”

Harris was working at his father’s West Newton store, AJ Harris Hardware, when he decided to open the bike shop.

He started out running it from the hardware store, then moved the business to a few different locations in West Newton before eventually moving to 1353 Washington St., where the bicycle store has been located for decades.

“There has been a Harris in West Newton Square for over 100 years,” he said. “Not many people can say that.”

Staff set up bikes for customers and made other adjustments, he said. Some families arrived with young children who had never ridden a bicycle before; Harris and his employees would help the children learn to ride.

These ties lasted for years.

“They rode because we showed them what to do,” said Harris. “And when they grew up, they came to pick up their children. So it was generation after generation.

All of these good things, he said, “make it look like we’re doing things right.”

The retailer has become well known for its physical store and for becoming one of the early adopters of internet sales, he said. Customers from virtually anywhere could contact Harris Cyclery looking for a specific part or an answer to a question, and his website became an important part of his business.

“It seemed like a lot of people were starting to order things online, and we were fortunate to be in that area at that point,” Harris said. “Sales have been pretty good for many, many years. “

But the impact of the pandemic on the store’s supply chain has made it difficult to store the bikes. The store maintained a bicycle repair business, although some parts were also difficult to obtain due to supply shortages, he said.

“You always pay overhead, and before you know it, you pay every day [and] you’re losing money, ”Harris said. “That’s why we closed; we couldn’t get the bikes.

Closing the business, he said, was like experiencing a death in the family.

“It was a very difficult decision,” said Harris. “I’m 88 years old, but I still went there every day.

A note on the store’s website on the morning of June 9 thanked customers and employees for their support and said goodbye to them.

“We do it with a certain sadness, but we also do it without regrets. For seventy years, this family business has been serving the cycling community and that makes us happy, ”said the note. “We are proud of what our thousands of loyal customers, both local and online, have enabled us to accomplish during this time. “

In the post, members of the Harris family said they felt their reputation for value and integrity “was part of the world of cycling in the western suburbs of Boston and beyond.”

Online, supporters praised the Harris family, and some posted decades-old photos of themselves with bikes from the store.

Jimmi Mahalares, a store worker, wrote on Sunday: “It’s sad it’s my last day at work there, I really enjoyed working with colleagues, the Harris family treated me amazingly , they are great people, the kind you just don’t seem to find these days.

A poster on the “All Over Newton” Facebook group called the store a “class act” that will be difficult to replace.

Its closure “leaves a gaping hole in W. Newton Square and in the hearts of thousands of current and former Newton residents, who have marked milestones with new Harris family bikes,” the post said.

Another client wrote: “This was one of the places in MA that I couldn’t wait to visit when we moved here 10 years ago.

The store informed customers it was closing about a week before it closed and returned the bikes for repair, Harris said. People shared their memories of the store and what it meant to them.

John Hilliard can be reached at [email protected]