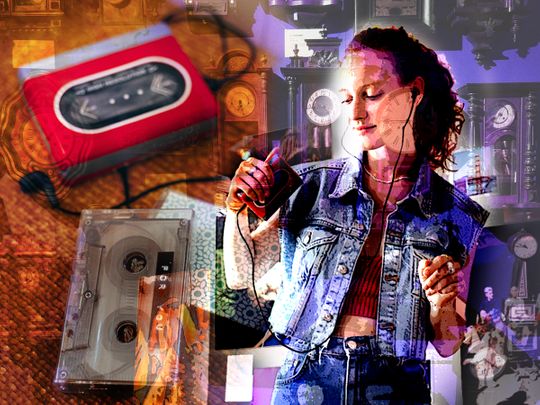 Walk with the walkman, which brings music to the ears

Obsolete gadgets and their impact on bygone eras serve as a fascinating reminder. Find out – with a piece of history and some quirky facts.

This is the fifth in a six-part series of stories. Part Four: Film Cameras: When Every Image Was Precious

How the Walkman amazed me and faded away

If there’s one gadget from the past I could salvage, it would be my Walkman. This nifty piece of engineering drained countless AA batteries, outlasted every headphone it was paired with, and survived numerous drops after being pulled from my belt.

Completely black, as heavy as a brick, the Walkman was a gift from the United States. My grandmother’s older brother had brought it in his suitcase of goodies, along with several clothes, bags, shoes, books and medicine when he landed in Delhi on his biennial trip.

Throughout its life, the only maintenance the Walkman ever needed was a head cleaner that I applied to it with an earphone every two weeks.

I vividly remember the first time I got my hands on it, only to throw it away in frustration moments later. There were no audio cassettes in the house!

We were at our grandmother’s for our annual vacation. Packed in our suitcases with comics, holiday homework, board games and puzzles. No one had thought to bring a few audio cassettes. There were no music lovers at Nani either. So after fiddling with the buttons on the Walkman for a while and carrying it on my belt as I wandered around the house, I kept it in the bottom of my suitcase and left it there until we got there. back home just before school.

Back home, the first thing I did was walk to the nearby music store and buy some tapes. I even bought blank tapes. By connecting our music system to the TV, my friends and I made several mixtapes. MTV and Channel V were playing great music back then.

Towards the end of its life, the Walkman began to unwind cassette tapes at will. The batteries also lasted a fraction of their usual lifespan. The headphone jack slot loosened and added a lot of static if the device wasn’t still.

I remember taking it to local repair shops. They could repair old TVs, VCRs, and camcorders, but didn’t know how to repair a Walkman from the United States.

It’s the day I threw him in a truck full of old clothes and toys. He never saw the light of day after that.

My walkman was a tape-chewing monster!

My favorite song is from the 80’s supergroup “The Traveling Wilburys” and it’s called “Handle With Care”. But my Sony Walkman chewed up the tape this song was recorded on.

Oh, the irony…until that devastating moment in 1990, I loved making mixdowns on our old Boombox and then listening to them on that little portable audio player I got for my birthday. The Boombox was kept in the kitchen next to the hand mixer. This little egg beater was like a mini gym – it would hurt your arm in seconds when you had to whip cake mix. I was convinced that it helped develop my biceps and it was very important to me because at the time I thought big, strong arms would impress Jennifer McKinley, the pretty girl in my class.

I was 12 and this is how my brain worked… So after a few weeks of extreme whipping that resulted in lots of delicious cakes and a growth spurt, I did my best Incredible Hulk impression and I flexed my muscles in the playground right in front of her believing she would fall madly in love with me. She did not do it. Not one to give up so easily, I thought a mixed tape would be the perfect way to express my undying love, so I recorded one ranging from love songs to heavy metal. It took five outrageous hours to make. I even produced it in alphabetical order, can you believe that? The first song was “Super Trouper,” that catchy, peppy jingle from Abba. Then, to change the mood, the next song was ACDC’s head rocking ‘Highway to Hell’.

Then… I got tired and abandoned the alphabetical order opting instead for a random approach and so the next track was ‘You Got It’ by Roy Orbison. ‘Every time I look into your loving eyes. I see the love that money just can’t buy. Lyrics like this by ‘The Big O’ and Jennifer would be a hit, I thought. However, the very next song included the line “You take it, you break it, you hurt me” (Brian May, “I’m Scared”). Hmm, posts like this might be confusing, but the tape was like my emotions at the time, all over. I couldn’t stop now and start over because, well, I just couldn’t be bothered and also there was a rumor going around that Sarah Wilkinson loved me.

Do you know what they say? ‘Don’t put your eggs in one basket’, so I rushed to finish the compilation and added ‘Got My Mind Set On You’ by George Harrison, ‘Sweetest Feelin’ by Jackie Wilson and ‘Mr. ELO’s Blue Sky’ before ending it with ‘Handle With Care’. Wondering where Jennifer and I would go on our first date, I put the tape—which was hot now due to all the transferring, rewinding, and editing it had been through—into my Walkman and I listened to the tracks in bed.

I dozed off to the soothing sounds of Jeff Lynne, Elvis and even Kylie Minogue (give me a break, I said I was 12!) but was woken up in the morning by a strange ringing in my ears . No, it wasn’t tinnitus, it was the creak of my Walkman chewing on the tape! Suffice it to say, I never had that date with Jennifer and in my mind the Walkman is a gadget from the past that may well and truly stay there.

Tomorrow: “I miss some cool gadgets from the 90s”