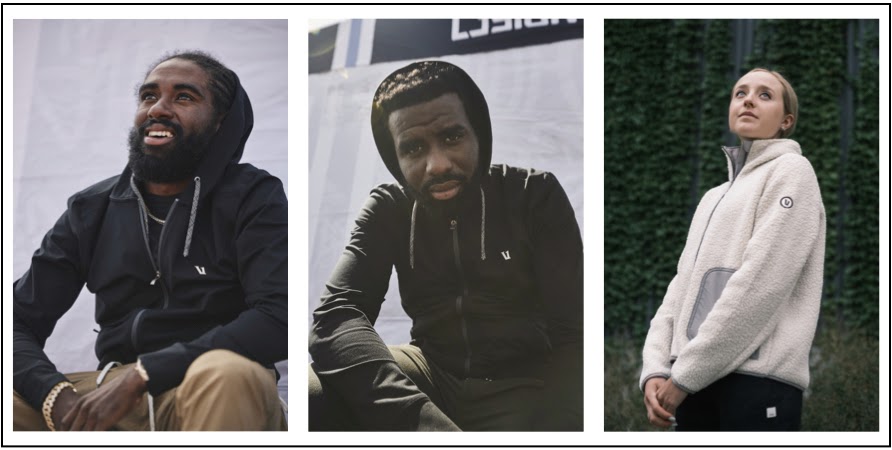 [ENCINITAS, CALIF.] November 2, 2021 — Today, Southern California-inspired sportswear brand Vuori announces L39ION (pronounced legion) cyclists Justin Williams, Cory Williams and Skylar Schneider as brand partners and collaborators. As such, the three decorated cyclists will participate in various marketing initiatives over the next year, including advertising and social media campaigns as well as in-person and virtual branding events. With the exception of cycling specific gear, Vuori will be the exclusive off-road wear partner for Williams, Williams and Schneider.

L39ION, the UCI continental cycling team based in Los Angeles, was created in 2019 by brothers Justin and Cory Williams. Determined to promote diversity, representation and inclusion in the world of cycling and beyond, L39ION’s ultimate mission is to help grow the sport in America and let the masses know that you don’t need to comply to be part of the cycling community. Additionally, L39ION is dedicated to using its platform to give back to the younger generations and showcase criterium racing in a way that athletes can make a living competing at home in the United States.

“L39ION is more than just being good on the bike,” said Nikki Sakelliou, Vuori vice president of marketing. “The team’s commitment to inspiring and uniting people from all walks of life to create and share positive and meaningful experiences is a philosophy Vuori respects and shares. We couldn’t be more proud to have Justin, Cory and Skylar as new collaborators for the brand.

The three L39ION riders can regularly be seen at the world’s biggest and most competitive races, most often battling for the top spot on the podium. Justin Williams is a multiple-time national champion of the United States and took 1st place at this year’s national road racing championship in Belize, his parents’ home country. Cory Williams won the overall championship from the prestigious Tulsa Tough, making it his biggest racing victory of the year, and Schneider was considered one of America’s most promising drivers, with nearly 20 top spots to his credit this year, including outstanding performances at Tulsa Tough, The Tour of Hartland, Spartanburg Criterium and most recently the Joe Martin Stage Race.

“Not only do they make amazing products, Vuori is a brand that works hard to make it known that no matter who you are, what you look like or where you live, you deserve to live a full, meaningful and happy life,” said Justin Williams, founder of L39ION of Los Angeles. “At L39ION, we couldn’t be more aligned with these values, and we look forward to seeing where this partnership takes us. “

Launched in 2015, Vuori fuses technical clothing with a West Coast vibe that looks and feels great. Founder Joe Kudla didn’t have to look far for inspiration; Based in the ambitious beach community of Encinitas, California, Vuori is a natural extension of its home environment where active, conscious and creative people inspire those around them every day. In addition to a successful e-commerce business and physical stores in Boulder, Del Mar, Encinitas, Bridgehampton, Malibu, Manhattan Beach, Newport Beach, San Francisco, San Jose, and Venice Beach, Vuori is sold in most Nordstrom stores. and REI. Please visit www.vuoriclothing.com for more information.

The Los Angeles L39ION is a UCI continental cycling team based in the United States. The team was founded in 2019 by brothers Justin and Cory Williams to advance cycling, break down boundaries and promote diversity, representation and inclusion. The team is dedicated to using its platform to give back to the younger generations and showcase criterium racing in a way that athletes can make a living competing at home in the United States. In 2020, the Legion became a UCI continental level team and formed a professional female team. cycling team.