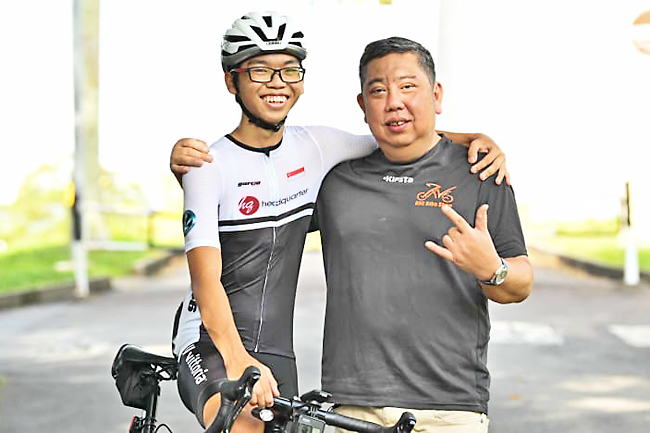 SINGAPORE (CNA) – For Chen Jun Wei, 18, what made him fall in love with cycling was the wind in his hair and the euphoria of riding fast on deserted roads at night.

But it is also an escape. He doesn’t see much of his parents – a truck driver and a convenience store assistant. “I do my best to spend time with them, but I think they are very busy,” he said.

Almost every night he got on his bike – a gift from his parents to avoid trouble – and roamed the roads of Singapore. He remembers an “epic” island tour, when he cycled from 5 pm to 6 am.

He had friends who liked to ride a bike, but he usually rode alone. Also, he said, his friends mostly rode road bikes – faster and easier to pedal on roads and sidewalks – and his mountain bike couldn’t keep up with them.

In July, one of them, Shaun, told him about Team Garcia, young cyclists who took part in local competitions. It piqued his interest: maybe he would find some new buddies to ride with – after all, it finally got lonely to ride alone.

He asked Shaun if he could join the team.

This is how he walked into a neighborhood bike shop in Bishan and met the man who changed not only his life, but the lives of others like him through a combination of loving care and of an opportunity.

FROM GANG MEMBER TO ENGINEER

The owner of RNE Bike Shop and founder of the Garcia team is Melvin Lee, 54 years old. He too was once a teenager who lacked the care he now so willingly offers.

He saw his sailor father once a year, while his mother, who did odd jobs – from sewing military clothes to selling laksa in the streets – struggled to make ends meet for Lee and her two sisters. .

Left alone at home, he walked through his neighborhood of Circuit Road, a place he describes as infamous for gang activity. It wasn’t long before he joined a youth gang himself. “We could bully a guy for a whole year,” he recalls.

His results dropped and he was about to be kicked out of school.

Around this time, when he was 14, a police officer approached him to join the MacPherson Boys’ Club. The Boys’ Club, run by the police, was a network of clubs that provided at-risk teens a safe place to relax in the housing estates.

Lee agreed, drawn to the activities and free games on offer. What kept him there, however, were the mentors – the police.

It was tough love, he said, and they demanded respect.

They sometimes insisted that he join events and excursions like a trip. “They were like, ‘I’ve already put your name down. It’s an order – you better go, ”he said. He has never regretted going there.

He mostly clicked with one of the mentors, whom he knew as Uncle Tang. “He’s a Cantonese, I’m a Cantonese,” Lee said. “He is very close to me.

Uncle Tang basically raised him, gave him “a lot of support” and even spoke to his mother sometimes to say that “actually Lee is not that bad.”

That’s why, when he failed his O levels and decided to enroll in a machining apprenticeship course with a three-year obligation, he asked Uncle Tang to be his surety.

“When he read the contract he was shocked,” Lee said. It wasn’t until the signing that Uncle Tang found out that he would have to pay SGD 32,000. But to Lee’s relief, Uncle Tang signed the contract. “He said, be a good person, okay?” Do not let me down.

With the opportunity, Lee graduated with honors and began his career as a machinist.

Over the years, he rose through the ranks in different companies, earned an engineering degree and traveled the world, helping to oversee projects. Eventually, he started his own plastic injection molding business.

TWO TEENS AND THEIR POTENTIAL

In 2013, Lee decided it was time for a change. After selling his business, he was spending his time fishing when a friend approached him about the idea of ​​starting a bicycle shop.

“I just wanted to pass the time,” he said. “Every day I was just at the fishing pond… until one day my wife told me that I would lose touch with the world if I continued like this. “

At the time, he had no cycling experience. But he learned to serve them and began to enjoy the process. Two years later he launched his own brand of bikes, Garcia.
One day in 2018, two teenagers walked into his shop.

Miguel Mitch Pacheco and his friend Yanda saw an Italian racing bike outside the store.

Curious as to why such a bicycle – which they had been eyeing on Carousell – was parked in the heart of the country, they stepped inside.

Lee immediately caught their attention, and not in a good way. “He looked very fierce,” said Pacheco, now 21. But they were quickly surprised, for he was “the nicest uncle you could meet.”

Even though they didn’t know their way around a bike shop, Lee sensed their interest while chatting with them, so he invited them to join a recreational cycling group formed by him and his friends.

Over time, the relationship grew. Lee thought the boys had “potential” and they started spending more time with him, helping repair customers’ bikes and learning the ropes.

In 2019, he thought it would be a good challenge for them to compete in a national individual time trial championship.

He covered their competition costs and roped a client’s son – Ting Chun, 38, who had racing experience – to train them for free. The boys were scared but accepted.

They had six weeks to train, compared to the three to four months that serious riders usually take. But they trained hard, and Lee told them to do their best and “have fun” no matter where they are placed.

But the results stunned them. Pacheco placed 13th out of 18 riders, while Yanda placed fourth out of 16 in a category where he faced national cyclists.

Yanda, now 20, was selected for the national development team, which was the first step towards the goal of joining the national team.

He eventually gave up, but that’s when Lee realized there was potential to take the team further, and the Garcia team was officially formed.

Indeed, the character at the heart of the team is Lee, or Uncle as the runners call him.

“Without him, you can’t really call Garcia, Garcia,” Pacheco said.

Pacheco remembers being very shy when he first met Lee. But it’s hard to tell he was introverted the way he behaves now: confidently as he gives advice to the younger boys in the store.

“(Uncle) told me to talk more, even at work or school, just go to (people) and talk to them if you want to talk to them,” the young man said. “He’s basically like a consultant.”

Over the years, Pacheco has noticed how Lee has an intuitive way of getting runners, especially newbies, to open up to him. And the advice he gives them is “70% on life, 30% on the bike”.

“That’s what made this team a little more family friendly,” added Pacheco. “We have that sense of belonging here.”

He himself asks Lee for advice on everything from relationships to finances. “I was tasteless in high school and had no idea what I wanted to do,” he said. “But uncle gave me the spark to be in business.”

He is currently studying accounting at the Institute of Technical Education. In his spare time, he helps make bicycle wheels for a business Lee started with him and two others.

He also mentors other boys like Chen, who is now the proud owner of a Garcia road bike in black and purple.

Chen’s parents contributed about SGD 500 out of the SGD 3,000 cost, and the teenager worked as a warehouse assistant almost every day for two months to pay the rest. Lee sold him the bike at almost cost price, he recalls.

At that time, he had only known Lee for a month. Chen still remembers what his uncle told him when he was introduced to the bike: “Just (take a) shot. “

Chen has since taken a hard hit. The team trains on Thursdays and Saturdays, and they never miss a session.

In his free time he always rides on his own, enjoying the speed of his new bike and putting into practice the skills he learned from the team.

As if to make climbs. During a practice, the team took him to Mount Faber, and he remembers laughing on the way up when most of his teammates fell behind.

“I felt like it was easy for me, but I looked back and saw most of them struggling.

He’s always happy to lend a hand to his teammates and he knows how to fix bikes.

He loves his bike, too – it shows by the careful way he wipes it down and his detailed explanation of how he takes care of it. “It’s like my girlfriend,” he said with a smile.

Today, he dreams of representing the country, or of riding in Europe. And career-wise, he wants to “be the best engineer (he) can be.”

His newfound confidence doesn’t just come from the team but from Lee, who pushed him out of his shell.

“I always tell him, talk more. The more you hide, the more you suffer. Maybe when you’re talking someone can help you, ”Lee said.

Within just a few months, Chen even started mentoring new boys, teaching them how to ride as a team. “I’m so proud of him,” Lee said. “He was telling me he was very weak and couldn’t keep up with the team, but now he has the ambition to represent Singapore.”

Seeing that young people like Chen have flourished under his care, as he did at the Boys’ Club, he knows he is leaving a legacy.

“I always tell my boys, (when) you are famous and successful, you have to remember my uncle,” he said with a chuckle. “Anyone who can be a minister, please take a picture with me.”

For him, there is no limit to what they can accomplish.

Can you be excited about the iPhone 13? We tried • The registry

Liberal outrage over Christmas time from Biden to hypocritical Brandon