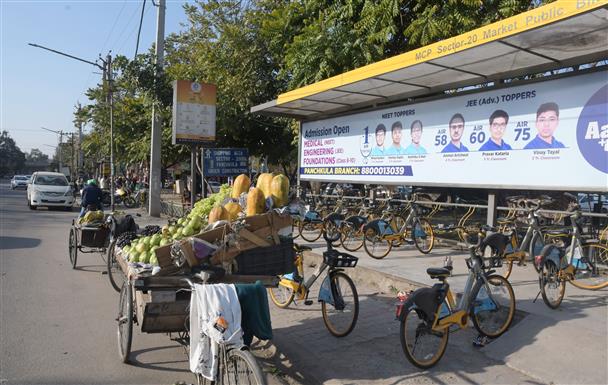 The Yaana bike-sharing project in Panchkula, the first of its kind in tricity, which was launched in August 2019, has seen a decline in ridership over time.

Compared to 2.34 lakh rides in the first 14 months of the launch of the project, 1.40 lakh rides were made in the subsequent 15 months. So far, so far, 3.74 lakh rides have been completed.

“Covid came in the way”

The self-service bicycle project is always a success. In fact, we had been in talks with the MC to expand the project to other parts of the city. However, Covid has emerged a major hurdle. We aim to open more bike stations in the Mansa Devi complex area and trans-Ghaggar areas. —Sourabh Jain, COO, Yaana

However, officials attributed the Covid-induced lockdown and winter season to falling user numbers.

Sourabh Jain, Chief Operating Officer (COO) of Yaana, said, “The bike-sharing project is always a hit among the Panchkula. In fact, we were in talks with the local civic organization to expand the project to other parts of town. However, Covid has emerged as a major hurdle in the way of our expansion plan. We aim to open more bike stations in the Mansa Devi complex area and trans-Ghaggar areas. »

He cited the Covid-induced lockdown and government restrictive measures and extreme winter in northern regions including Panchkula for the drop in ridership.

He said their project in Panchkula has become a model for other cities in North India as they have replicated the same in Hoshiarpur.

Regarding damaged bikes, Jain said that they have a dedicated team, which regularly takes care of the maintenance of the bikes. The city currently has 20 docking stations where 200 bikes are available for hire. All bikes are GPS compatible.

Bikes can be picked up and dropped off at any station.

The app-based bike-sharing project was launched to much fanfare in August 2019 by Chief Minister Manohar Lal Khattar.

From Canada to South America by bike