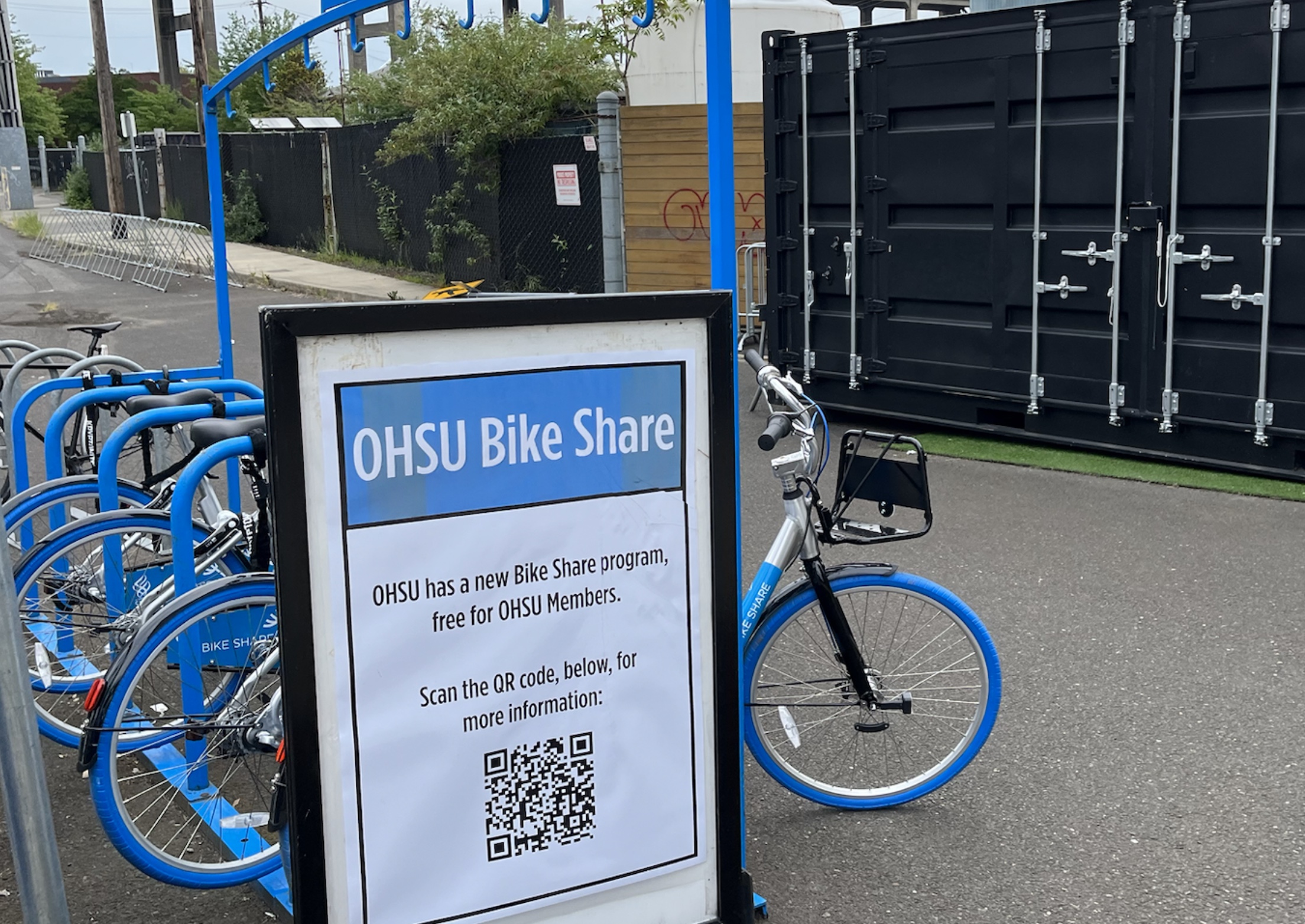 OHSU heading for a low-car future at South Waterfront

The Go By Bike valet and repair shop is coming back to life after the Covid doldrums. (Photos: Taylor Griggs/Bike Portland)

“Anything that will help someone not have to use a single vehicle to get to campus is good.” —Brett Dodson, OHSU

Portland’s range of transportation options converge at the base of the Aerial Tramway near the South Waterfront campus of Oregon Health & Science University.

If you stand on SW Moody Ave outside the lower tram terminal for a few minutes and take a look around you will see: the tram above you; The Portland streetcar rumbles; the 35 and 36 TriMet buses; Biketown and OHSU bike share stations; and people who ride their own bikes to Go By Bike, North America’s largest bike valet. A look north and you’ll see the MAX light rail, and you might even spot a few people on e-scooters.

That is, South Waterfront residents and OHSU visitors don’t want mobility options. And while the pandemic has presented challenges, the vision of a fuel-efficient car future is stronger than ever. 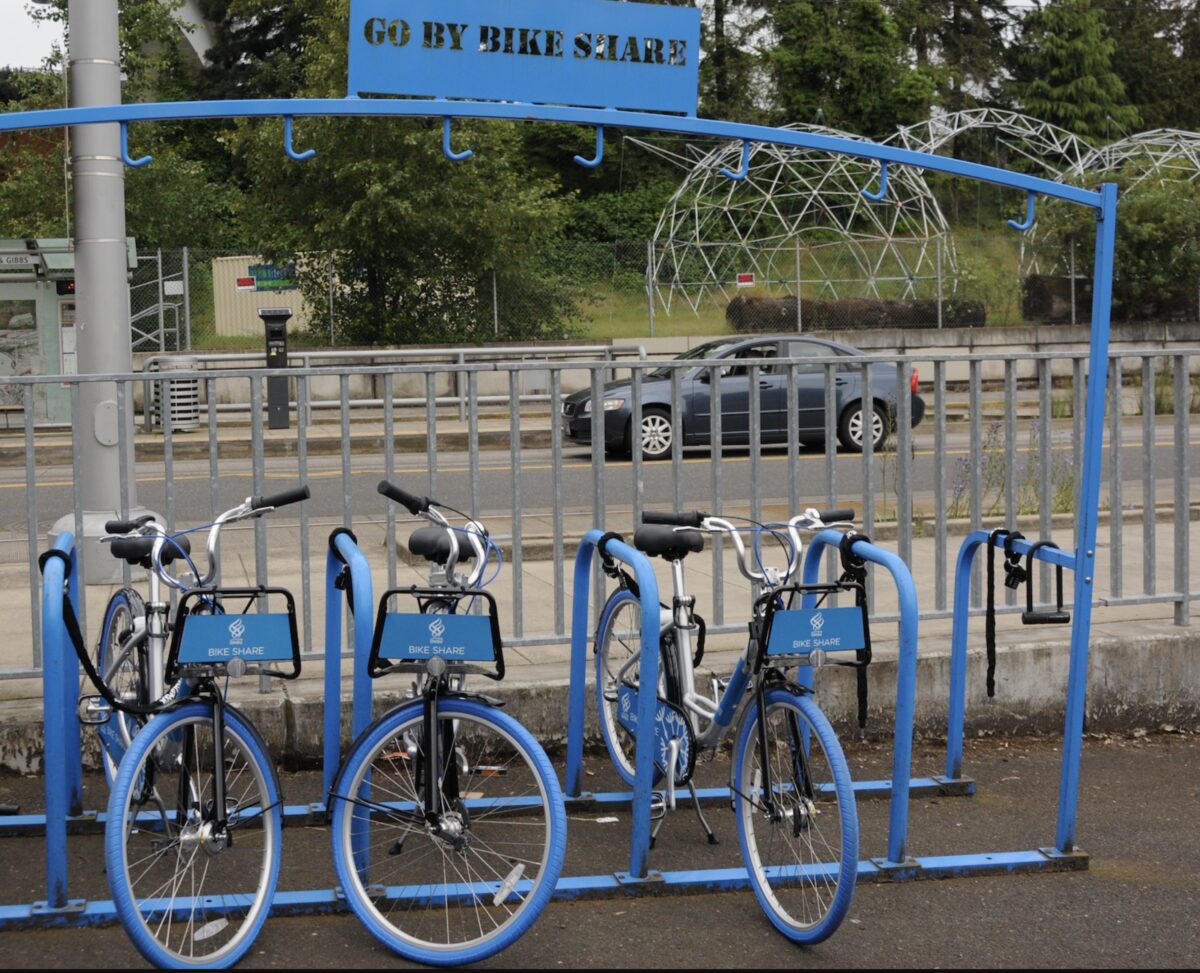 An upgraded Go By Bike Share station near the base of the tram.

OHSU operated its own Go By Bike Share Program free for anyone with a college email address since 2015, and the service recently got an overhaul with upgraded bikes and a new app that makes it easier to book one.

According to Brett Dodson, who directs transportation and parking at OHSU, about 100 people have created accounts and used the bike-share service since it launched last month.

Dodson says one of the reasons he and his team want to ensure adequate transit options on campus is to prepare for the TriMet Division Transit Project is expected to launch later this year. This project will bring improved bus service to the Division Corridor and become an alternative way to get from the East Side of Portland to the South Waterfront.

“We expect an increase in the number of employees using this road and additional traffic on the Tilikum Bridge,” Dodson told me in a recent phone call. “We need to have a way to connect them from public transit and get them to campus.”

At the Go By Bike valet and repair shop, which recently celebrated its 10th anniversary, business is picking up. On May 10, Go By Bike parked 249 bikes, the highest number since before the pandemic.

Before the pandemic, the valet parking service was almost running out of parking space to store people’s bikes. They don’t see those kinds of numbers now, with fickle weather and telecommuting likely being partly to blame, but the numbers are trending up. 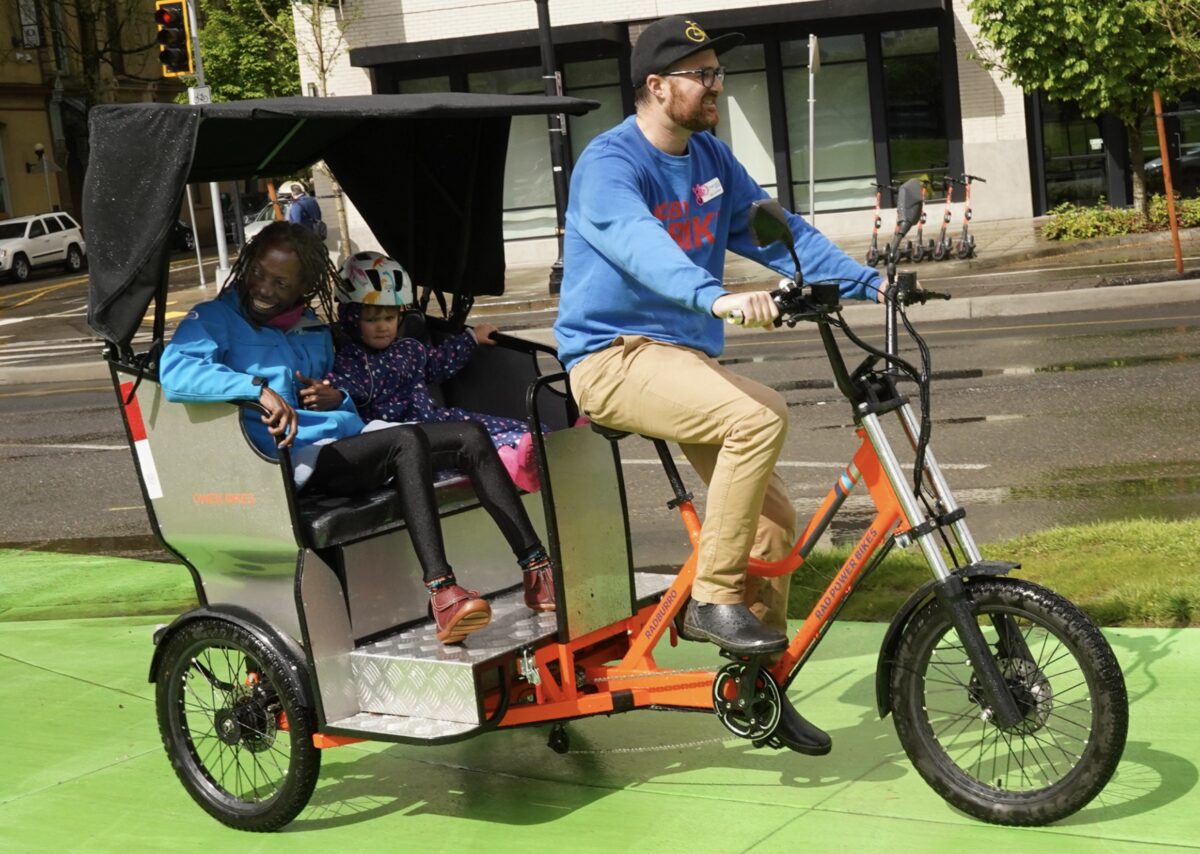 OHSU previously operated a shuttle van service as an additional way to help people get from the South Waterfront to Upper Campus, but this died out during the pandemic and will not return. Instead, Go By Bike will operate a pedicab service – the only one in town at the moment – ​​to move people around. Dodson says this option is important for people who are unable to use a bicycle or scooter, and he hopes it will not result in any net increase in ridership, even in the absence of the old shuttle bus.

“We haven’t had shuttles in a year and a half, and things have been going pretty well,” Dodson says. “Most people can get around with self-service bikes, on foot and on scooters. But the pedicab will be there to replace the shuttle for people who need it.

He says we should see a pedicab in operation by July, and depending on how things go, they’ll bring a second one.

Dodson says the pandemic hasn’t changed his desire for a car-free future in the South Waterfront and around the OHSU campus.

“We have a strong transportation demand management plan,” he says. “Anything that will help someone not have to use a single vehicle to get to campus is good.”

Taylor has been BikePortland’s editor since November 2021. She has also written for Street Roots and Eugene Weekly. Contact her at [email protected]