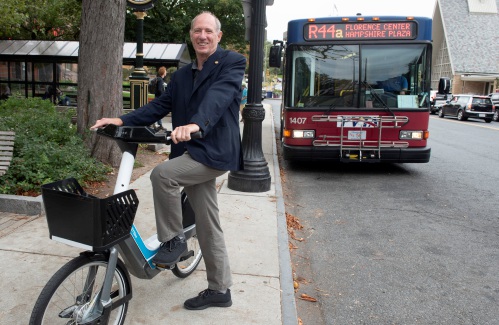 NORTHAMPTON – One of Northampton’s longest-serving civic leaders – a man the mayor described as ‘among the most influential government officials in Northampton’s history’ – has announced he is retiring.

Wayne Feiden, who has served as the city’s director of planning since 1997, will step down at the end of the month. Feiden, 64, served under five city governments during a 33-year tenure, starting as an environmental planner in 1988 before rising through the ranks to eventually become director of planning and sustainability.

“I absolutely loved every moment of working here,” Feiden said Tuesday. “But it is also time.”

In a statement, Mayor Gina-Louise Sciarra said the city owes Feiden “endless recognition” for his approach to conservation, climate change, housing and “putting people and equity at the center of the planning of government projects”.

“Wayne must be counted among the few Americans who have built a career that puts public service above self in service of a vision of a better community for all,” Sciarra said.

“It was built without a single pedestrian signal,” he said.

So Feiden got to work on “the least sexy thing you could imagine” – a fundraiser for a crosswalk near the Stop & Shop. And as he watched people spend their hard-earned cash to make a street they didn’t live on — and walk on — more walkable, he said, it was a wake-up call for city ​​officials. The community had changed and wanted a more pedestrian-friendly city, he said.

And Feiden has been part of many of those paradigm shifts over the years. During his tenure, the city quadrupled the amount of protected open space, which now accounts for a quarter of the entire city. The city has also expanded shared-use bike lanes and other cycling infrastructure, boosted grant writing, transformed regulations to encourage sustainability, and made the city a more walkable place.

Feiden explained that when buying open space over the past two decades, it has become common to carve building land out of the plot in order to build affordable housing. He explained that the first time he went to city council for one of these deals, there was some skepticism.

“Last time they were like, ‘Hey, are you just doing four of these batches? Why not eight? “, he recalls. “Those are the fun things.”

There were challenges too, of course. Feiden said that when the city comes up with a comprehensive plan, everyone seems to want the same things: quality neighborhoods, affordable housing, open spaces and bike paths. At that aggregate level, he said, planning is “pretty easy.”

But Feiden even derives joy from this part of the process, figuring out how to do it all.

Going forward, Feiden said the city will continue to move towards better access for bicycles and pedestrians. And the city center will increasingly change from a place where you have to come for a job or to buy a hammer, for example, to a place where you want to come.

Feiden, however, will not be part of this job as a city employee.

His last day of work is June 29, after which he plans to travel and work as a consulting planner on projects around the world. He will continue to teach at the University of Massachusetts at Amherst, where he worked as a lecturer during his tenure at the city. Sciarra has appointed Carolyn Misch, Deputy Director of the Department, as Acting Director of Planning and Sustainability while the position is posted and an open search is conducted for the position.

Dusty Christensen can be contacted at [email protected]

The Heybike Ranger is a sturdy folding electric bike