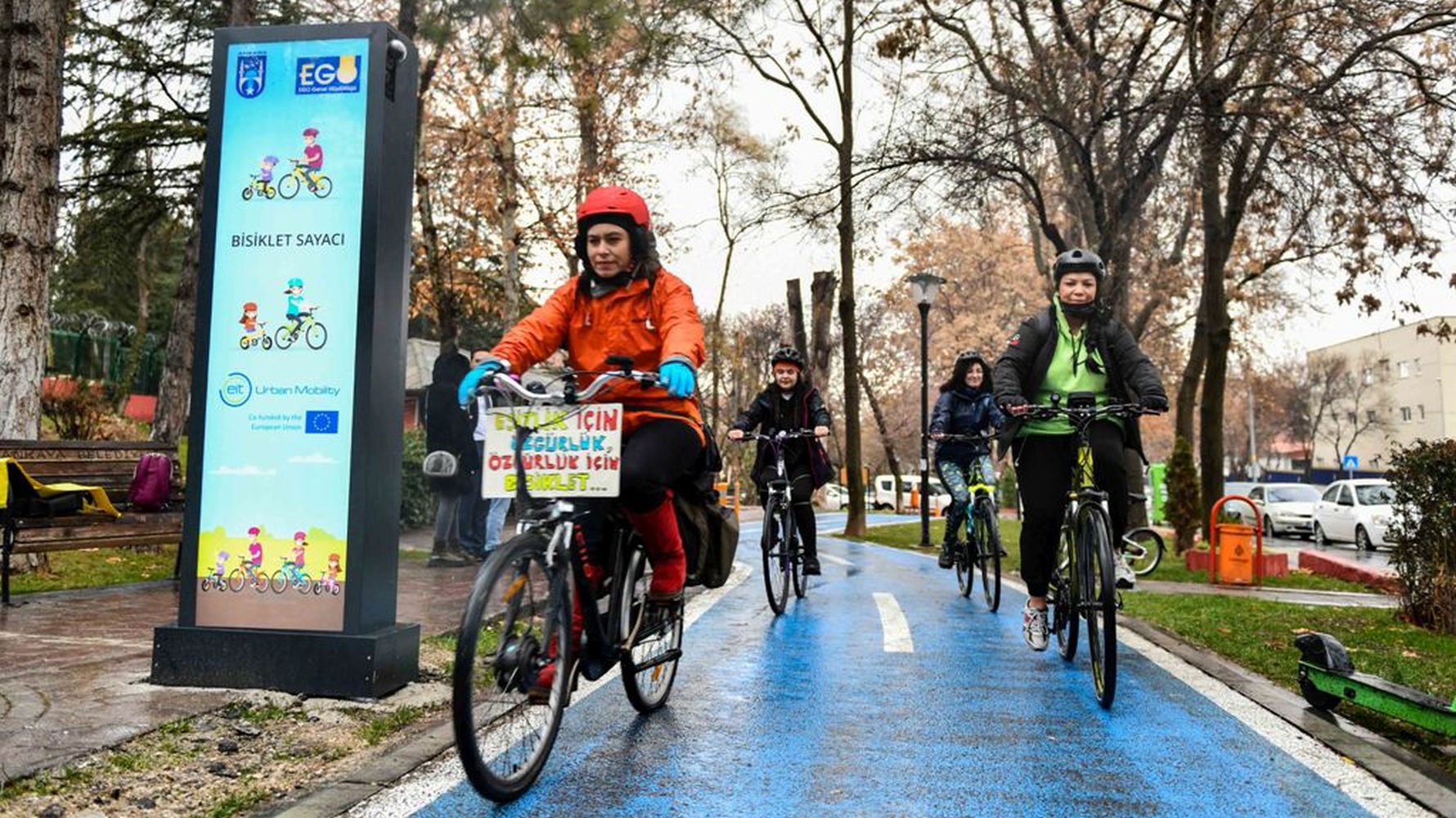 The general management of EGO has implemented a new application within the framework of environmental and sustainable transport projects in Başkent. Under the project “Integrating Micromobility Infrastructure with Existing Public Transport (MeHUB)”, the first “bicycle counter” produced in Turkey by Sabancı University and OSTİM Technical University with state and national means began to be used on cycle paths built by the Metropolitan Municipality. Statistical data will be collected by measuring the use of bicycles with the artificial intelligence-based bicycle counter installed for the first time in Bahçelievler Eser Park.

Under the project “Integrating Micromobility Infrastructure into Existing Public Transport (MeHUB)”, the first bicycle counter produced in Turkey with the cooperation of Metropolitan Municipality, Sabancı University and Technical University OSTİM, with national and national means, began to be used on cycle paths. The bicycle counter, based on artificial intelligence and equipped with a camera system, was installed for the first time in Bahçelievler Eser Park.

DOMESTIC METERS WITH 100 PERCENT EU SUBSIDY WILL BE EXPANDED

Ali Onuralp Ünal, project manager of the transport technology department of EGO’s general management, said that he aimed to determine the rates of use while promoting the use of bicycles in the capital, and gave the following information about the project:

“As the general management of EGO, we have set up one of the cycling infrastructures that we have built in many parts of Ankara under the European Institute of Innovation 100% Grant Project and Technology, a body of the European Union. R&D work has been done for the bicycle counter under the project we have done with Sabancı University and OSTİM Technical University. We have produced these bicycle counters, which have been used all over the world since 2002, locally in Turkey for the first time. Many different technologies are used in bicycle computers around the world. While our bike counter detects bikes with a wide-angle camera, it is also interpreted by artificial intelligence. It is instantly shared with the decision-makers of our establishment. One was placed in the area between the National Library and Beşevler, which is currently only on the route of the 1st stage. In the next few days we will place 1 more and make decisions with 8 bike counters across Ankara. It aims to determine the density by measuring the pedestrians, bicycles and scooters passing through the cycle lanes, and following this determination, the decisions of the future cycle lanes to be taken in Ankara are targeted.

DATA IS COLLECTED BY THE CAMERA

The images obtained by the bike computers’ wide-angle camera will first be analyzed in real time in the image processing unit.

The smart meter based on AI-based image tracking technology, which will detect and classify objects in the image, transfer the generated statistical information to server systems via the Internet. Faculty Members of OSTİM Technical University Assoc. Dr. Rıza Bayrak made the following assessments on the bicycle counter project they developed:

“This project is the first smart bicycle counter with technology based on artificial intelligence and image transmission that we have developed in collaboration with the general management of EGO. This is therefore part of the concept of smart cities. It’s just an optimization tool. Should bike lanes be built? How much do you need to do? For the answers to all of these questions, utilization rates are extremely important to us. Thanks to the R&D project that we have developed with EGO for this purpose, we currently count cyclists and pedestrians. We will include scooters in the next phase.

THANKS TO THE METROPOLIS OF BICYCLE USERS

Emphasizing that the bike counter will be encouraging for those who want to use a bike, bike enthusiasts expressed their thoughts with the following words:

Aygul Dogan: “I am 22 years old and I am a student. I have been cycling for many years. The data here is transmitted to the municipality. The higher the number of bikes, the more incentives will be given to those who want to use bikes. According to these data, the municipality will further increase the cycle paths. This project has motivated us, we thank you for it.

Burçin Tarhan (founder of the Pedaling Women Group): “I cycle to work, to errands and home all the time. As cyclists using the bike lanes, we don’t know the stats here at all. Therefore, local governments that do so are not aware of these numbers. Knowing these numbers means making business arrangements accordingly. Here is a statistic. The information collected here will be collected annually in the municipality’s data collection system.

Stationary bike or treadmill: which is the best workout?