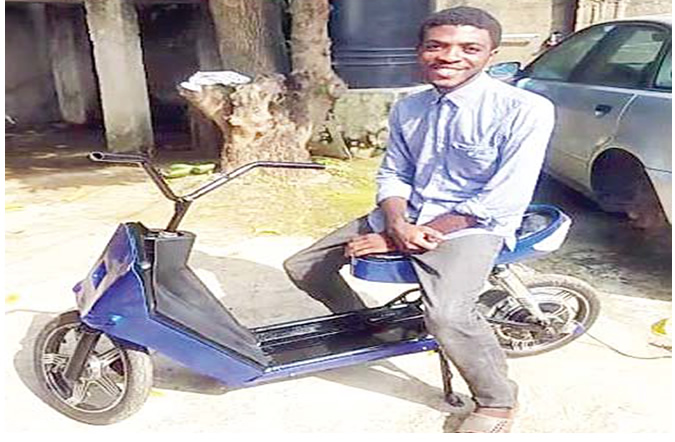 Idris Muhammad, 27, a graduate of Al-Qalam University in Katsina state, who built an electric motorcycle, says ALEXANDRE OKERE on his passion and his vision

Can you tell me more about you?

My name is Idris Muhammad. I am from the state of Nasarawa. I’m 27 years old. I have BSc in Biology from Al-Qalam University in Katsina State. I graduated with Second Class Lower.

What do you do for a living?

I am currently a corps member serving at the Technology Development Center, Kaduna Polytechnic.

There is a report on social media that you built an electric bike. Can you tell me about it?

Yes, I built an electric bicycle. As a little boy, I loved creating things. In high school, I was a member of the JETS Club. I love to solve problems; whenever i face a problem i try to see how i can fix it.

Have you ever taken automotive design engineering training?

(Laughs) None. The main inspiration is my passion for creativity and technology. When I was a teenager I loved cars.

Where does inspiration come from?

It started when I was in college. In my first year there was a problem with the power supply and it was difficult for me to research my phone because I didn’t have a power source to charge the phone battery. So I started looking for a solution. I researched renewables and found a particular battery called a lithium ion battery, which was the best at the time, albeit expensive.

Faced with electricity issues during my college training years and lack of financial resources to afford a generator, I thought about developing a battery storage system to power my phone and fan, then turn on my bulbs. I finally did. Afterwards, I was able to take care of a functional lithium-ion battery that could power my room for 24 hours at a time non-stop. I also installed a solar panel to support it. It was during my last year in college that I made up my mind to build an electric bike and car.

Most of the materials for the bike come from junkyard craps. After sketching out the design of the bike, I built a prototype to see if it would work. I didn’t just want to make a bike that can move, but a functional bike. I made the prototype in 2019. I bought the materials for the prototype from an electric motor and bikes and it worked. When I started serving at the CTD at Polytechnic, I wanted to build an electric car. I met the head of the department and presented the idea to him. He was interested and told me to write something like a proof of concept, which I did. I showed him the photo of my prototype (bike) and he told me that (the idea) could work. A few months later I think it was May he told me he liked the idea but advised me to try something small so I decided to build an electric bike.

Building a machine is expensive. How did you find the funds for the project?

I got funding from the ministry.

How much did it cost to build one?

I wouldn’t say it was cheap but I planned to use recycled materials as much as possible. But the prototype cost me around 70,000 N. I had no problem with the prototype; he could go 30 kilometers but the problem was that I was on a tight budget.

Do you still have the prototype?

I had to use some of its parts for the Green Raven electric bike?

Did you have to add imported materials?

I bought the battery gauge to tell me how much power is left. I also bought the controller.

How did you come up with the name, Green Raven?

It is not yet an official name. For now, I call it the green crow – “green” because it runs on electricity and electricity can come from renewable sources like the sun and wind, and “raven” because it is is a silent bike, not completely silent but you can hardly hear it coming; this is why I often use the horn when I ride. Crows are generally quiet and reclusive birds.

What are the characteristics of the vehicle?

It is powered by a brushless DC hub motor built into the rear wheel. It runs on 1500 watts but the motor peak is 2400 watts. It is powered by a 60 volt battery that can give me an average range of 40 kilometers and more, depending on how you drive it.

Does it only work on batteries?

How can it be billed?

It can be charged with a wall outlet.

How long can it take to be fully charged?

Has the Green Raven reached its completion stage, in terms of design and capacity, or do you have plans to improve it??

I will make some improvements. I plan to add a USB charging port for smartphones and a phone holder so that the phone can act as a speedometer. The bike does not have a speedometer. Maybe in the future I want the bike to serve as a source of energy to power a living room.

It seems that the electric bicycle cannot carry more than one passenger. Can he?

It might take more than one but it wouldn’t be comfortable. I sometimes carry my brother. I actually have another bike I’m working on. It will be a complete bike, with a seat for two passengers.

Are you planning to become a commercial?

Have you received a partnership offer in this regard?

For the moment, I have no partnership, no offer yet.

Does the Federal Ministry of Science and Technology know about your success?

Do you need their support?

Of course, I want support.

Do you think he can support you?

After achieving this goal, what’s the next thing for you?

Have you read about young Nigerian inventors who had to either put their dreams on the back burner or take them to a foreign country because they couldn’t get the right support back home?

Yes I have about it. I feel sad but I can do it. I need support but I don’t care. My mind will not be cooled if I do not receive such support.

How did your family feel when your invention went viral?

My siblings made the first post. They recorded a video. My family was happy. My father was surprised.

Is he an engineer?

No. He is a quantity surveyor. My mother is a health worker.

Would you like to study engineering instead of biology?

Yes. All my life I have always wanted to study something related to engineering and I think about it now.

All rights reserved. This material and any other digital content on this website may not be reproduced, published, broadcast, rewritten or redistributed in whole or in part without the express prior written permission of PUNCH.

A transcontinental auto route once ran through Bay View – The Yellowstone Trail: The Bay View Compass