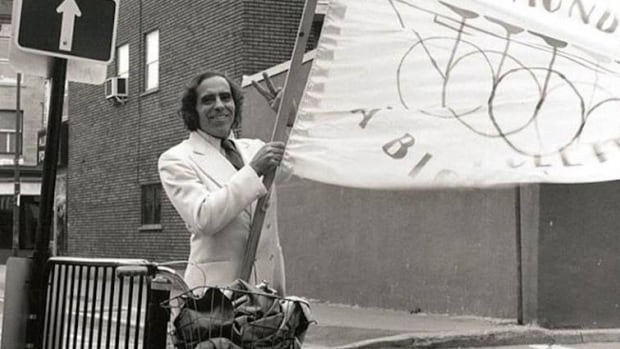 The Montreal cycling community mourns the loss of Robert “Bicycle Bob” Silverman. He died on Sunday aged 88 after a life dedicated to making the world a safer place for those who chose pedaling over petrol.

Silverman, known for his poetry, satire and dramatic flair, is credited with playing a key role in making Montreal the cycling city it is today.

In a tweet on Sunday, Montreal Mayor Valerie Plante said her thoughts are with Silverman’s family and loved ones.

“Robert Silverman was a pioneer of cycling in Montreal. An early activist, he helped make cycling safer and promote active mobility. We owe him a lot,” she said.

Silverman died of natural causes at Pavillon Philippe-Lapointe, a long-term care home in Sainte-Agathe-des-Monts, Que., about 100 kilometers north of Montreal. He is survived by his sister, Rona Klein, and several nieces and nephews.

Silverman was born on November 30, 1933. He co-founded Le Monde à Bicyclette in 1975, and a year later was part of a group of lawyers who organized the first “die-in” with the aim of draw attention to the number of cyclists and pedestrians killed each year by vehicles in Montreal.

Silverman was known for doing publicity stunts to put his cause in the spotlight, doing things like painting bike lanes himself or staging a massive influx of bikes onto the subway at a time when they were banned there.

Robert Silverman recites poetry on a bicycle in 1990

NDG County Peter McQueen, a longtime cycling advocate, worked closely with Silverman for about a decade through Le Monde à Bicyclette in the 1980s and 90s.

They have traveled together, met with cycling groups and advocated for cycling infrastructure in places like Boston, Toronto and even Vietnam.

When the World on a Bicycle was founded, nobody was talking about bike lanes, McQueen said.

“They pushed for these kinds of key improvements that would expand opportunities for cyclists,” McQueen said.

The bike goes from “toy” to transport

Jacques Desjardin remembers receiving a call from Silverman in 1975 to form a cycling advocacy group that would use satire, comedy and other performing arts to capture public attention.

Desjardin, who was a founding member of Le Monde à Bicyclette, said Silverman was a charismatic maverick who thought outside the box. Desjardin was considerably younger than Silverman when they joined forces, he said, and Silverman already had plenty of experience in political activism on a global scale.

At the time, there was no way to bike to the South Shore and, Desjardin recounts, Silverman once dressed up as Moses and swore to part the St. Lawrence River so cyclists could cycle between Longueuil and Montreal.

Jean-François Rheault, director of Vélo Québec, said Silverman and his group sent a strong message that cycling infrastructure was important at a time “when the bicycle was considered a toy”.

Silverman conveyed that message through drama and poetry to help people understand the importance of cycling, he said.

“Changes take time, but clearly the message they carried at the time made the difference,” Rheault said.