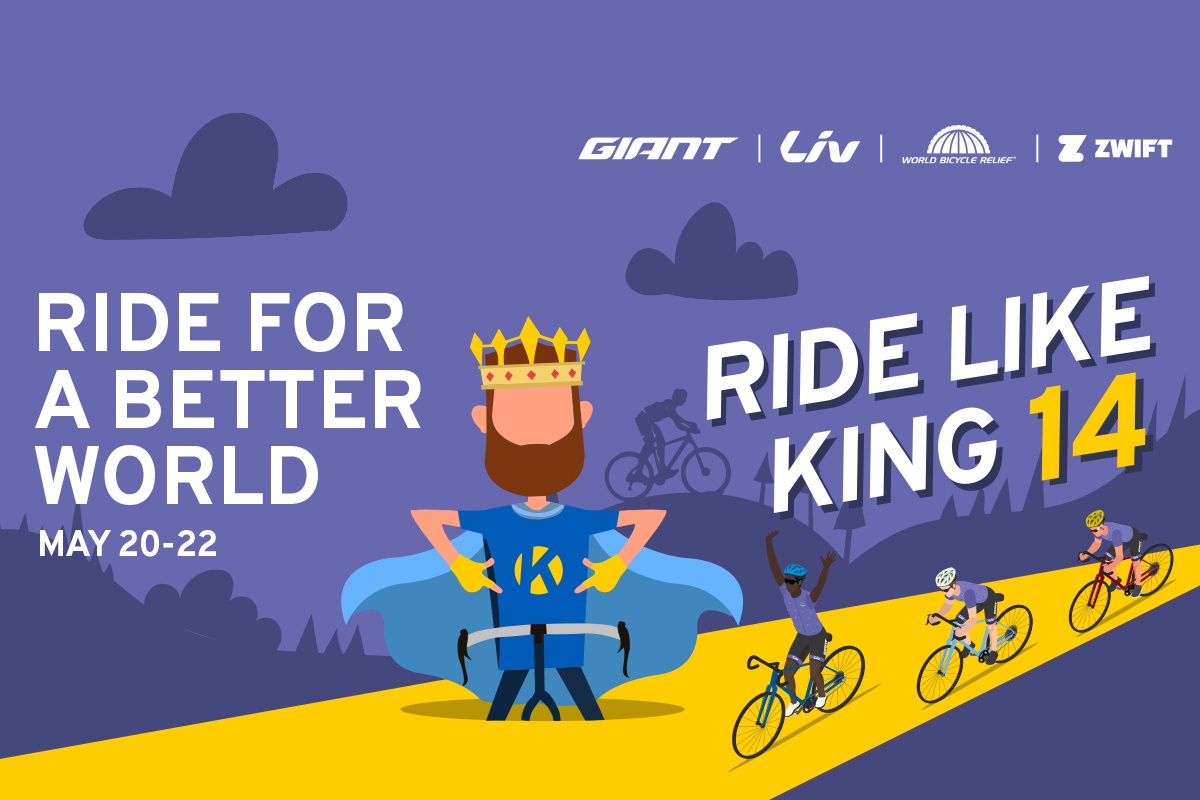 Giant Group, parent company of the Giant, Liv, Momentum and CADEX brands, has once again partnered with World Bicycle Relief and Zwift for its annual Ride Like King event. Now in his 14and year, this celebration of Giant Group founder King Liu’s belief in the power of bicycles takes place May 20-22.

Ride Like King brings people together from around the world to participate in virtual group rides online as well as in-person rides within their communities. This year’s event features special competitions, product giveaways and opportunities to get involved in advocacy through World Bicycle Relief, a global charity group that uses bicycles to help mobilize people in the regions. low income.

“Ride Like King began as an internal celebration of our founder’s passion for cycling among Giant employees, retailers and friends,” said Phoebe Liu, Group Chief Brand Officer, Giant. “Over the years it has continued to grow, and with the help of great partners like World Bicycle Relief and Zwift, we continue to grow and welcome new participants every year as we ride for a better world. This year is even more meaningful as we celebrate 50 years of Giant Groupand Anniversary and share our mission to help communities thrive through the power of bicycles.

To honor 14 years of Ride Like King, Giant Group made it easier for the community to win Buffalo bikes for World Bicycle Relief by increasing the number of Zwift events to nine and donating one bike for every 1,000 km traveled collectively (against all 1,300 km the previous year). Giant Group will also match the total number of bikes donated by the community, doubling the impact.

Last year nearly 5,000 people took part, racking up nearly 200,000 km and donating 300 bikes to people in need. These specially designed bikes are designed for heavy loads, long distances and rough terrain. They are manufactured by Giant Group and assembled by World Bicycle Relief employees in local regions around the world.

“We are thrilled to have the continued support of Giant Group through Ride Like King,” said Dave Neiswander, CEO of World Bicycle Relief. “The legacy of this event shows Giant Group’s longstanding commitment to showcasing the power of bicycles, and the funds raised continue to help mobilize individuals and communities to thrive. Giant Group’s support of World Bicycle Relief, as the manufacturer of our rugged Buffalo bicycle and as a donor, helps advance WBR’s goal of distributing one million bicycles and empowering five million people in here 2025.”

In 2007, at the age of 73, King Liu prepared for and completed a 15-day, 927 km trek around Taiwan. This ride sparked renewed interest in King’s cycling lifestyle and the benefits cycling can have on health and fitness. To celebrate this passion for cycling, the members of the Giant group launched Ride Like King in 2009 as a small event within the company.

Over the next few years, King dedicated himself to longer bike rides as he traveled to countries near and far to inspire people and governments to consider the positive impacts cycling can create. King retired as president of Giant in 2016, but the event continues to grow each year. Outdoor rides are hosted by Giant and Liv employees, retailers, ambassadors and fans.

This year, there are nine Zwift Ride events over three days with an open or women-only option for each event. The Zwift rides will be supported by professional Giant and Liv riders from affiliated teams including Team BikeExchange-Jayco, Liv Racing Xstra, the Giant Factory Off-Road Team and Liv Racing Collective, as well as other athletes and ambassadors representing the brands.

All participants will be assigned RLK14 kits during their rides and can unlock these kits at the end of a ride. Riders will be assigned Giant TCR Advanced SL Disc bikes for the open rides or Liv Langma Advanced SL bikes for the women’s rides. Alternatively, three of the rides (one per day) will use WBR Buffalo bikes for the open and women’s rides. Entrants will also earn a chance to win limited-edition RLK14 jerseys, signed by King Liu, on each outing. Five jerseys will be distributed during each of the nine races scheduled by drawing lots.

More jerseys will also be given out to attendees of local Ride Like King outdoor events in their own communities. Giant and Liv employees, retailers and friends are encouraged to ride May 20-22, sharing stories and photos on social media. To be eligible for prizes, riders can simply post photos of their rides on Facebook or Instagram with the hashtag #RideLikeKing on those dates.

For more on this year’s Ride Like King events, visit the RLK14 event page at www.giant-bicycles.com/RLK14 or www.liv-cycling.com/RLK14

Donations can be made to World Bicycle Relief at https://www.powerofbicycles.org/fundraisers/ridelikeking14/

And for details on all Ride Like King events on Zwift, go to https://www.zwift.com/events/series/ride-like-king-14

Banner RLK 14: This marks the 14th year of celebrating Giant Group founder King Liu’s passion for cycling and his belief in the power of the bicycle. Cyclists around the world are invited to join in the fun and Ride For A Better World in support of World Bicycle Relief.

World Bicycle Relief: Last year, RLK participants helped mobilize people in Kenya’s Siaya region by collectively riding nearly 200,000 km on Zwift, enough to donate 300 WBR Buffalo bikes. This was part of a larger effort to deliver as many bikes as possible to multiple groups in this community for maximum impact in the area.

Bahati Zwift: People around the world can tune in on Zwift rides led by Giant athletes and ambassadors, including Rahsaan Bahati (photo). Giant Group will not only donate one Buffalo bike for every 1,000km collectively rode during the three days of RLK14 Zwift events, but will also match the total number of bikes unlocked by the community to double the impact.

Phoebe Liu: Giant Group employees will participate in various group rides to support the cause. Brand Director Phoebe Liu (photo) will lead one of the women’s events on Zwift.

Tim Searle: Australian Tim Searle, founder of AHDR, which is one of the largest weekly ride series on Zwift, will lead two virtual group rides.

Shequaya Bailey: Shequaya Bailey of The Black Foxes, an international collective of black cyclists who ride Giant and Liv bikes in an effort to normalize blackness and multiculturalism in cycling, will lead one of the women’s races on Zwift.

RLK14 Jersey: Participants in Zwift Ride Like King events from May 20-22 will be able to win one of these special RLK14 jerseys signed by King Liu. Winners will also be selected from a social media photo contest.

Photo competition: In addition to Zwift events, runners around the world are encouraged to host their own races from May 20-22 and post photos to Facebook or Instagram for the chance to win special RLK14 jerseys. Last year’s winner Jana Lene braved the elements in the Czech Republic.

About the Giant Group

Giant Group was established in 1972. With the brand goal of “Raise The Bar”, it is committed to advancing the whole world of cycling and actively promoting a new culture of cycling around the world. Today, Giant Group is the largest bicycle manufacturer in the world and operates four major product brands: Giant, Liv, momentum and CADEX.