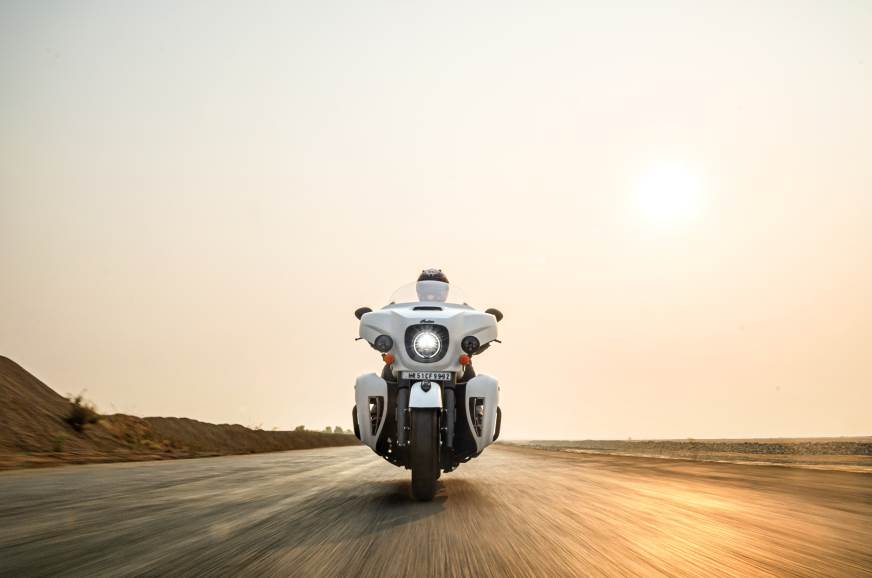 A bike with a name to match, a bike that effortlessly puts in the miles while tackling India’s road network with ease.

It’s 06:00. The sun is just beginning to rise behind the horizon. There is a twinge in the air which is unusual for the time of year. I’m sitting in the Indian Roadmaster Dark Horse’s super-plush seat, as its massive 1,890cc V-twin revs at a relaxed pace. Deep buzzes from dual exhausts mingle with enthralling Coldplay music blasting through the quad speakers of the 200W music system. I’m not sure what the American dream is, but driving a big American touring machine is an incredible experience. which is firmly etched in my memory. Here’s why.

To take a position

I think designing a big bike like the Indian Roadmaster is quite a challenge. You have this gigantic mass of metal to mold into something that not only stands out but is also pleasing to the eye.

For me, the first word that comes to mind when seeing the Roadmaster is “elegant”.

The huge fairing is beautifully shaped, with its curves and creases, and since this is the Dark Horse version, it does away with the chrome surround around the LED headlight and the two auxiliary lights that flank it. Instead, the LED auxiliary lights are placed on the indicators, outside the fairing, which contributes to its cleaner design. 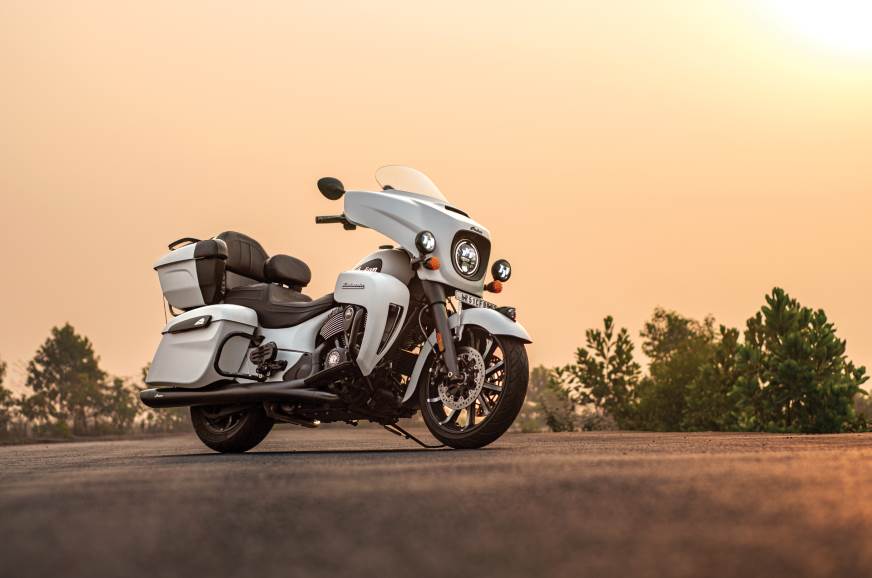 Beneath this fairing is Indian’s signature war bonnet ornament on the fender. Although it adds a touch of identity to the Roadmaster, it surprisingly doesn’t light up like on the Indian Chieftain – you have to buy the illuminated one extra here. You’ll also notice the large plastic bodywork around the front leg guard, which has vents that open to channel cool air to the running board and engine. The front looks captivating, but it’s not until you move to the side that you’re amazed at the length of this machine. 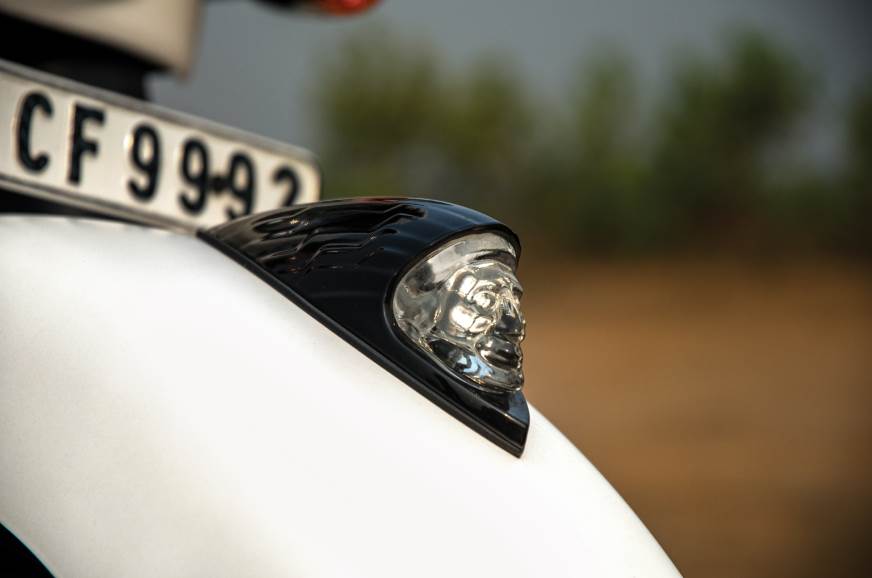 Teardrop-shaped, the 20-litre fuel tank flows seamlessly into sofa-rivalling seats. Beneath the tank, the new Thunderstroke 116 V-twin takes pride of place; and then there are the huge saddlebags and top case which total around 137 liters of storage volume. The top case doubles as a passenger backrest and can swallow two full-size helmets without a hitch. 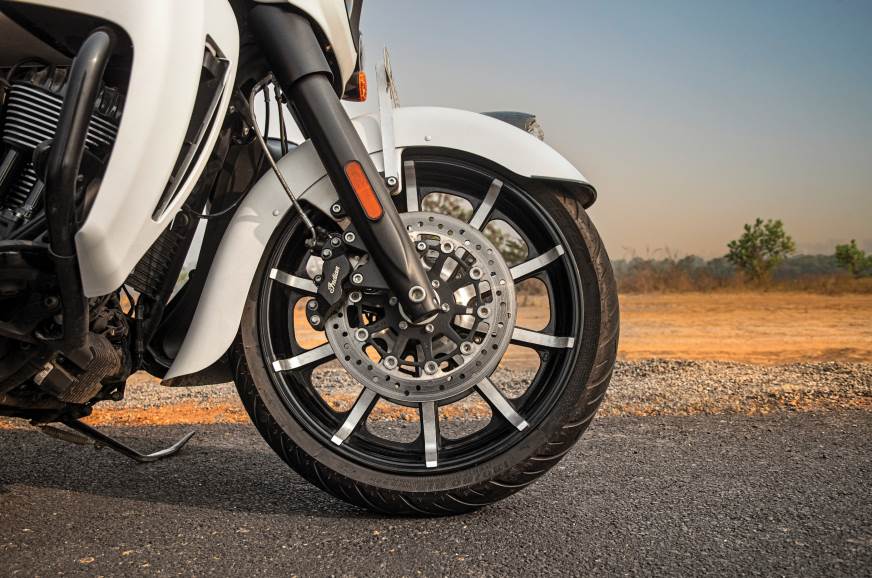 The wheels are particularly handsome, with the contrast cut finish on the spokes adding a touch of bling to the look of the bike.

Moving on to the rear end, it’s an equally beautiful angle, with the curved fender, neatly integrated taillights and those blacked-out dual exhausts jutting out from the bottom of the saddlebags. The only issue I have is that the top case lacks a light strip to improve visibility at night.

Now, with a motorcycle this big, dressed in that beautiful satin white color, and the fact that you’ll find a needle in a haystack before you find one on our roads, the Indian Roadmaster is the epitome of an attention magnet. Park the motorbike anywhere and you will see people pop up out of nowhere and remain fascinated by this otherworldly motorbike. Some inquire about the name of the bike, its engine size, specs and everything is fine until you see them dropping their jaws to the floor hearing the price of half a crore. Camera phones are quickly fished out for photo ops, and in an instant, you’ve become something of a celebrity. In the few years that I have been testing motorcycles of all kinds, I have never seen such a level of admiration and curiosity from road users.

What adds to the special feeling riding this motorcycle is the type of features offered. The 200W music system I mentioned earlier is incredibly loud, with two speakers in the fairing and two in the lower passenger seatback. One can listen to songs clearly inside a full-face helmet and even at speeds over 120 km/h. Keep audio leveling in dynamic mode and it will automatically adjust the volume to compensate for increased wind and road noise. The 7.0-inch touchscreen infotainment system between the two front speakers is gloved-hand responsive and displays a plethora of information. You also have Apple CarPlay for added convenience. 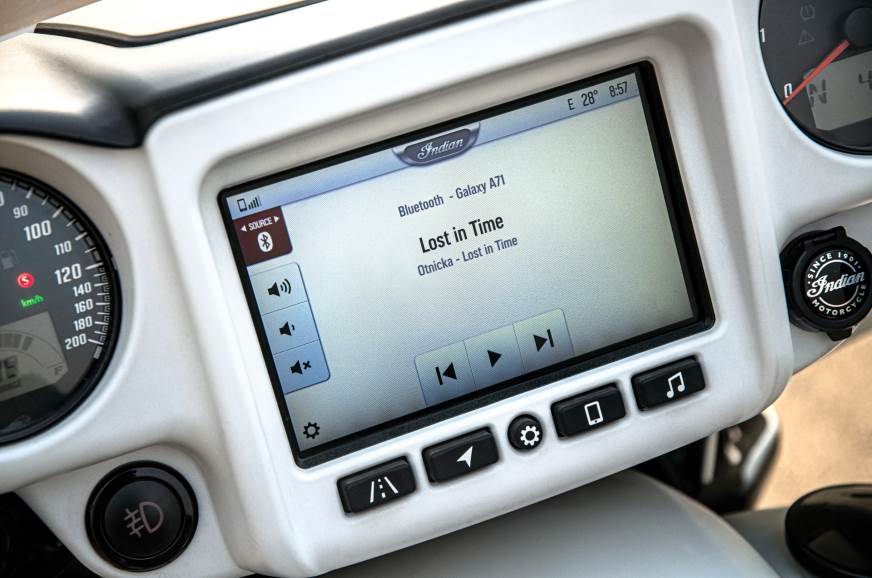 The 200W music system is audible even at high speeds.

Also, I’m a sucker for analog dials and glad to see the bike has one for speed and engine rpm. The windscreen can be raised and lowered at the touch of a button, the ignition is keyless and you can also lock the panniers remotely.

Finally, the bike has heated grips, as well as heated and cooled seats, as per the brochure. However, these weren’t functional on our test bike, and the person who gave us the bike didn’t know how to connect them. Still, the Roadmaster is feature-rich, as it should be, considering the money spent on it. And adding a sense of value to that money spent is an absolute gem of an engine.

That oversized, air-cooled V-twin engine is the hallmark of the Roadmaster, and it plays a central role in the experience the bike brings to the table. With 171 Nm peaking at just 3,000 rpm, you have a surge of torque from the moment you release the clutch lever. It’s like the automotive equivalent of a locomotive. It’s necessary, considering the half-ton of weight the motor has to propel, as well as the combined weight of the bike, rider, passenger and luggage. Once you start, the Indian quickly hits triple-digit speeds, if you’re generous with the throttle. On the other hand, it doesn’t mind sticking to low gears in higher gears, for example when riding around town.

But the icing on the cake of this V-twin is the levels of refinement, regardless of the position of the rev needle. There is simply almost no vibration in the handlebars or footpegs, which goes a long way to making a short or long ride an enjoyable experience. 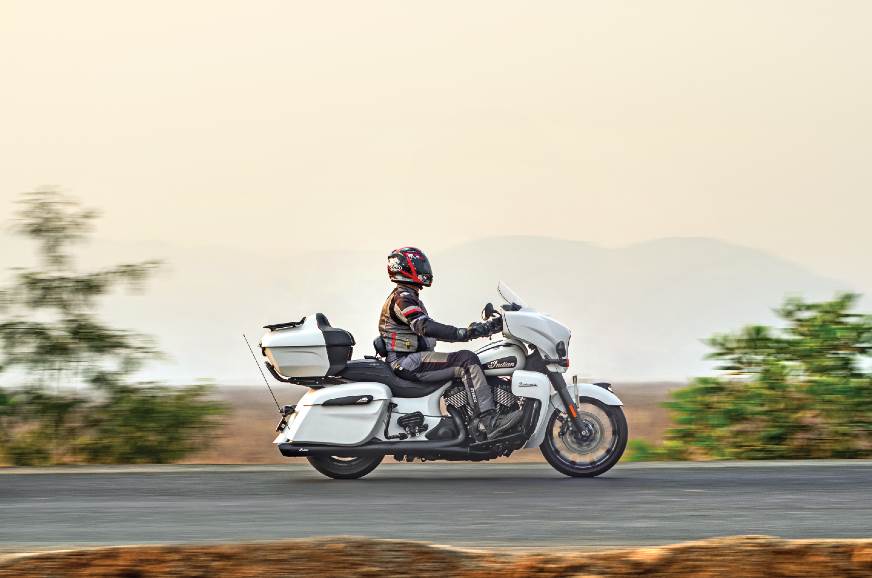 Navigating the road with your favorite music in company is relaxing.

The three drive modes – Standard, Tour and Sport – show a significant difference in power delivery. The good thing is that even in Sport mode the throttle response isn’t out of control. Speaking of throttle response, the Roadmaster was much more natural than the abrupt, disconnected feel of the Indian Chief Bobber that uses the same motor.

That said, the downside of sitting on a motorcycle with such a large air-cooled engine is the amount of heat it gives off. There were times when I regretted cycling through the congested streets of Mumbai, with the heat sometimes reaching unbearable levels. The rear cylinder deactivation feature helps to some extent, but our traffic conditions and weather are at the end of the scale for it to have a significant effect on heat management. So if you’re planning on riding the Roadmaster for your daily commute, don’t.

Looking at the specs, it’s only natural that you’d feel intimidated by the 403kg curb weight. But the moment you start moving, all that weight seems to disappear. This bike is so well balanced that you could crawl at 5 km/h with your feet on the floor, or fly around a fast corner at 140 km/h with the bike sticking to a planned line. Part of the confidence in the bike also comes down to the suspension setup. It soaks up bad roads much better than you’d expect (definitely nicer than the big Harley Street Glide Special and Road Glide Special we’ve also ridden recently) and isn’t as disruptive either. by the bumps in the middle of the turns. In fact, I was amazed at how easy it was to change direction, despite the over 1600mm wheelbase. 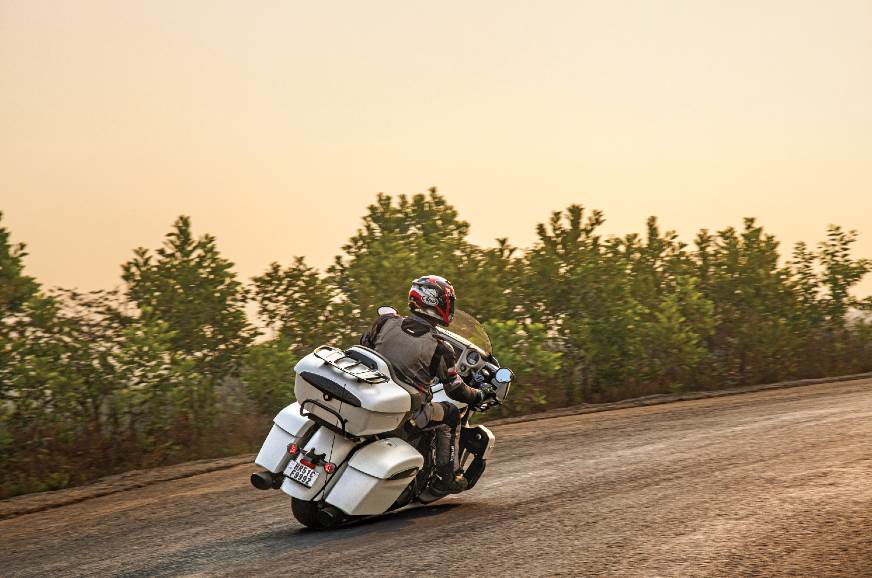 The only thing you need to watch out for is the limited cornering clearance on either side before the bottom of the running board starts scraping the road. Additionally, the 140mm ground clearance, while decent, still requires caution to be exercised while negotiating extra-tall speed breakers.

Another aspect to keep in mind is that it takes some effort to stop the juggernaut, especially at high speeds. Bigger discs should therefore be part of the next round of upgrades on this bike.

One of a kind

Of the various motorcycles we’ve had the pleasure of riding, the Indian Roadmaster Dark Horse stands out as one of the truly special ones. There is nothing like this motorcycle on our roads and nothing can compare to the experience of riding this motorcycle. 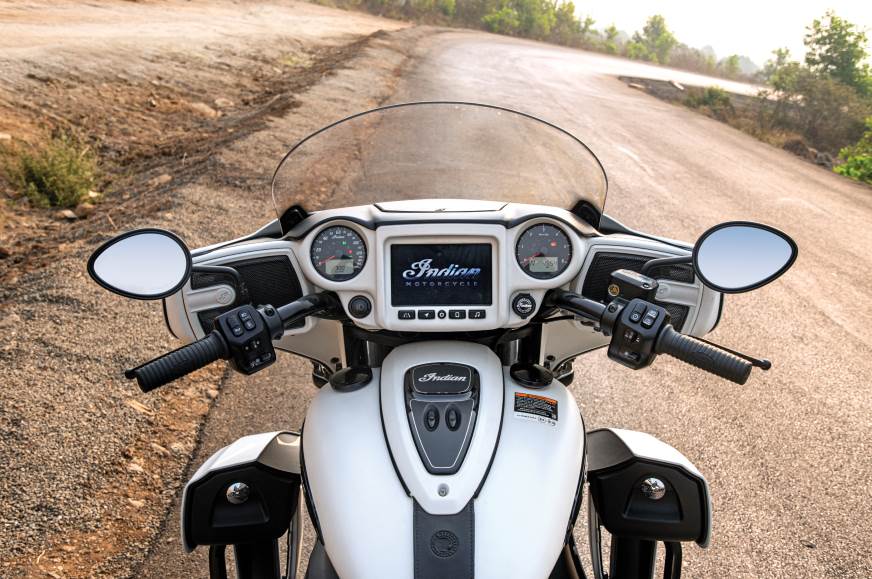 Perhaps one of the most special POVs from the driver’s seat.

At least, until Harley-Davidson brings its new CVO range to India. Even then, there’s a certain charm about the Indian Roadmaster. It looks great, drives well and there is an air of exclusivity around it. Paying upwards of Rs 50 lakh (on-road, Maharashtra) for this motorbike is certainly the prerogative of the very well-heeled, and you also need to be at peace with a small service network. But if you fit that bill and fancy driving an American cruiser equipped with all the bells and whistles, the Roadmaster is a must-have. As for me, I’m just going to sit back and reminisce about that beautiful sunrise on that very special day riding the Roadmaster.