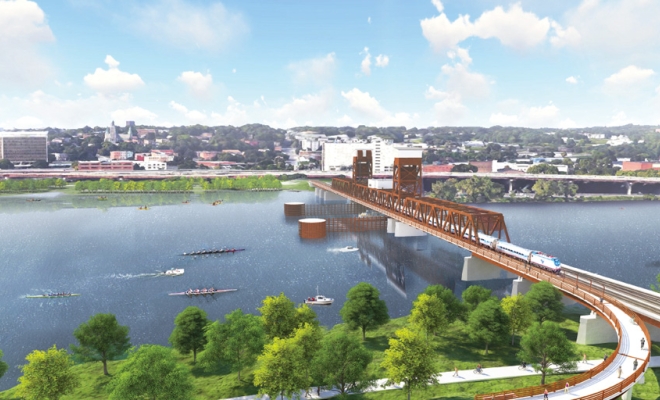 “Anyone who rides the rails in upstate New York knows all too well the travel delays caused by the outdated Livingston Avenue Bridge,” Governor Hochul said. “Replacing this 19th century relic will not only improve passenger and freight rail service throughout New York City, but it will also provide cyclists, hikers and pedestrians with a new, safer way to cross the Hudson River. Today marks a major step forward in this transformative project, and I encourage all interested residents of the Capital Region to attend one of the public hearings.”

Public hearings are a key part of DOT’s public engagement effort and are required as part of the state and federal review process. A virtual hearing will be held at 6 p.m. on Wednesday, May 31 and can be accessed via Zoom here. An in-person hearing will be held at 6 p.m. Thursday, June 1 at the Palace Theater on Clinton Avenue in Albany. Both sessions will include project information presentations by DOT personnel. A recently completed environmental assessment for the project is available for review here.

The Livingston Avenue Passenger Rail Bridge was built over the Hudson River in 1865. It connects Rensselaer and Albany by rail and provides a critical path for passenger rail service from New York west to New York. The deterioration of the current structure, owned by CSX and leased to Amtrak, limits the passage of trains to one at a time at speeds of 15 MPH. The new bridge will improve passenger service.

The current movable swing bridge would be replaced with a new lift-type bridge that would bring the structure up to modern height, width and speed standards for passenger and freight trains and more reliably accommodate marine traffic using the Hudson River. . The new bridge will be located south of the existing bridge on a parallel route and would carry two railway tracks. The approach track work will include improvements to the triangular rail junction on the Rensselaer side to facilitate train turning movements and the rehabilitation and reconfiguration of the rail bridges on Water and Center Streets on the Albany side. The new bridge will also include a separate shared-use lane connecting the Albany Skyway and Empire State Trail to the town of Rensselaer.

Construction is expected to begin by the end of 2023. Completion of the new bridge, which is expected by the end of 2026, will build on the success of previous projects in a around the city of Albany, including including the Albany Skyway, which transformed an underused exit ramp off Interstate 787 northbound to an elevated park that connected the city’s downtown to the Hudson River; and the famous Empire State Trail, which spans 750 miles and runs from New York City through the Hudson and Champlain Valleys to Canada, and from Albany to Buffalo along the Erie Canal.

New York Department of Transportation Commissioner Marie Therese Dominguez said: “The replacement of the Livingston Avenue Railroad Bridge is another demonstration of Governor Hochul’s historic commitment to rebuilding critical infrastructure in New York State, and to doing so in a way that improves mobility, strengthens our economy, and brings people and communities together. These public hearings are an important opportunity to hear from the community as we develop this project and ensure an end result that makes all New Yorkers proud.”

Senator Charles E. Schumer said: “I join the entire Capital Region in celebrating the start of this long-awaited project. I worked last year to secure $16 billion for Amtrak to make infrastructure improvements, and urged them to make the Livingston Avenue Bridge the top priority on the Empire The bridge is a pivot for rail and river traffic and, of course, it has the promise of transforming our network of waterfront pathways into the Capital Region The new bridge must include pedestrian access.

Representative Paul Tonko said: “Years of inaction and underinvestment in our infrastructure have negatively impacted countless communities, driven up costs for Americans, and stunted our economic growth,” Congressman Tonko said. “That’s why I fought hard and was proud to push forward legislation, including our Bipartisan Infrastructure Act, that makes long-needed investments that will help us thrive. Today’s announcement is an important step towards building our 21st century infrastructure, and I applaud everyone involved in this worthwhile effort.”

State Senator Neil Breslin said: “The public hearings for the Livingston Avenue Bridge will provide an important opportunity for community members to provide input on the future of the bridge and a vision of what the replacement will include. I look forward to continuing to be part of the process and hearing the feedback.”

Assembly Member Patricia Fahy said: “The Livingston Avenue Bridge Replacement Project is another exciting development that helps revitalize downtown Albany while reconnecting it to our greatest historic and natural asset, the Hudson River waterfront. The Livingston Avenue Bridge will create a new multi-modal route from Albany to Rensselaer County and improve connections between our communities and illustrates a new wave of targeted and transformative investment in the economic and regional potential of historic downtown “Albany. As we seek to build on this work, let’s further reimagine I-787 to reclaim and re-access Albany’s waterfront, the Livingston Avenue Bridge will complement the ongoing and renewed investment in the heart of the Albany region. capital city. “

Assemblyman John T. McDonald III, RPh, said: “The public hearings for the Livingston Avenue Bridge will provide an important opportunity for community members to provide input on the future of the bridge and a vision of what the replacement will include. I look forward to continuing to be part of the process and hearing the feedback.”

Albany County Executive Daniel P. McCoy said: “The Livingston Avenue Bridge, as it now stands, is a relic of the past that no longer reflects how far Albany County and the Capital Region have come in terms of economy and interconnectedness. our communities. This replacement will improve public transit and commerce – by rail and water – while stimulating recreation by allowing safe cycling and walking on the river. This funding is an investment in our future and will bring this critical infrastructure into the 21st century. I welcome public comment on the project.”

Albany Mayor Kathy Sheehan said: “It is more than exciting that we are moving forward with the long-awaited replacement of the Livingston Avenue Rail Bridge. Governor Kathy Hochul’s $400 million investment, coupled with a portion of the $16 billion secured by Senate Majority Leader Chuck Schumer, for Amtrak infrastructure nationwide repairs, will help complete this off-the-shelf project that will not only revitalize the bridge next to the nation’s ninth-busiest train station, but also create a pedestrian- and bike-friendly pathway across the Hudson River – further connecting Albany and our Riverfront with the points to the east. I urge residents and those who have advocated for a new Livingston Avenue Bridge to join these public hearings to learn more and take advantage of this input opportunity to share what they would like to see as part of the new structure.