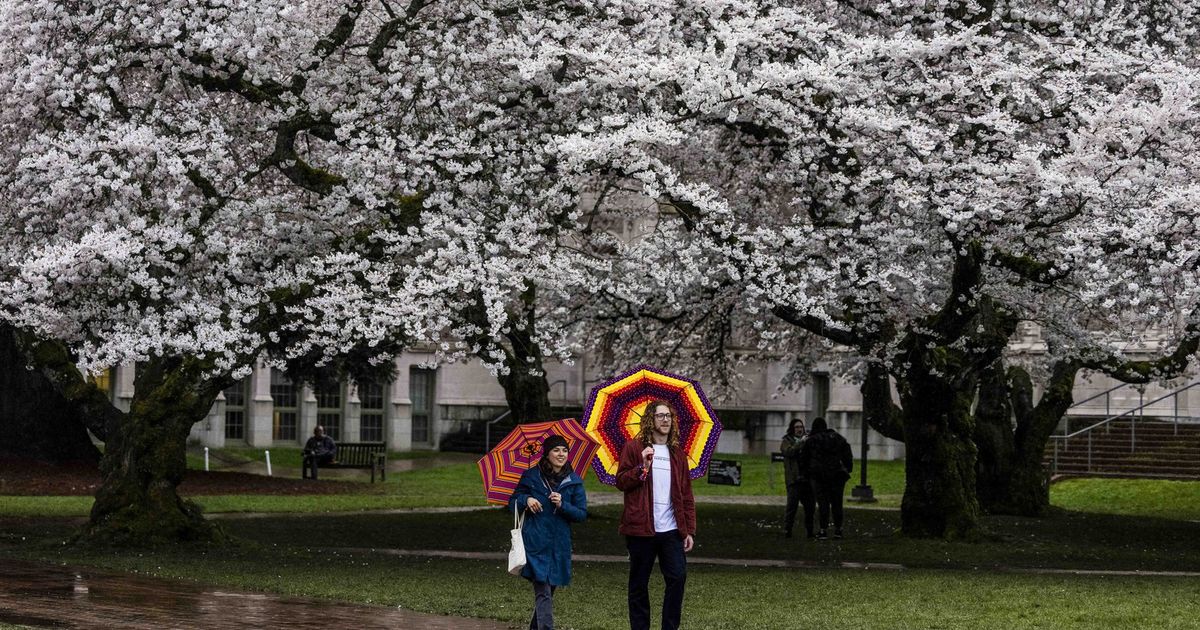 For a spring walk, try this 2.2 mile University of Washington Cherry Blossom Loop

One foot in front of the other

The University of Washington once again welcomes visitors to campus to view the school’s 29 Quad Cherry Trees, which draw thousands of visitors in a normal year. In the abnormal years of 2020 and 2021, however, when the cherry blossoms signaled the arrival of spring, the university asked people to stay off campus as a precaution against COVID-19, thank you very much.

The trees have been in full bloom for the past couple of weeks and cherry lovers have obviously heard the news: the area has been filled with tourists, photographers, students, picnickers, dogs and the occasional doofus. ignoring the many signs prohibiting climbing trees.

This short walk offers the best of both worlds: a route that begins and ends with Seattle’s most famous cherry trees, but breaks off to explore more UW, stretching to Montlake Cut and Union Bay – and into the history of Seattle. Hats off to the Seattle Cherry Blossom Run for inspiring this route. Andiamo!

Start with the UW Quad, which can get very crowded. If you need a landmark (other than several dozen vibrant pink and white cherry trees), look for the turrets of Denny Hall, the oldest building on campus. In front of Denny Hall is Denny Yard; beyond that is the Quad.

Getting there: Around campus, there are signs that specifically direct cherry blossom traffic, but your best bet might be to park a bit further away. There is paid parking near the Burke Museum on the north end of campus which is reliable, or go to st.news/UWpark for more information on visitor parking. I’m a street parking man myself, but to each his own.

Back to the ride: Yes, the Quad will be crowded. Take a walk, take a selfie, DON’T CLIMB THAT TREE! When you’ve had enough, exit the long side of the rectangle between Smith and Miller halls, heading away from Denny Hall. You will find portable toilets here, for your information.

Walk through Grieg Garden, named after Norwegian composer Edvard Grieg, whose bust maintains the peaceful little green space. It’s “the reverse of what folksinger Joni Mitchell once sang – they ‘unlocked’ a parking lot and built Paradise,” wrote Tom Griffin in a 2002 article in UW’s Columns magazine. Pulling on this thread – aren’t the Quad’s cherry trees, in fact, naturally occurring, but rather a stolen collection from the museum of trees Mitchell sang about? I’m just the rides guy, but worth investigating.

Continue through the HUB courtyard and look for the Sieg building. Sieg is bordered by Benton Lane Northeast, through which is our next stop: Drumheller Fountain. Choose wisely and you might catch a flock of ducks using the ramp to enter the fountain. Or take a break on one of the benches around the fountain to admire the blossoming trees and flowers nearby.

Looking down past Rainier Vista, you can see the 520 Freeway Bridge spanning Lake Washington and the hillside homes of Seattle’s Montlake neighborhood beyond the freeway. When you are rested and ready, follow the grass towards the water.

Exiting campus (briefly) at its southeast end, use the crosswalk to cross busy Montlake Boulevard. Once on the same side of the street as Husky Stadium, walk towards Montlake Bridge; at the bridge, take the descending path on the left which traces the water.

Walking on gravel Walla Walla Lane will throw you behind the ASUW Shell House on Montlake Cut. The century-old building is steeped in history: a hangar for World War I seaplanes, it was also the boathouse used by the 1936 Olympic gold medal team immortalized in ‘Boys in the Boat’.

Continue on Walla Walla keeping your eyes on the water for a chance to spot an otter, heron, turtle or duck. It’s a leisurely drive between the water and the Huskies stadiums – at least until the road turns left and climbs to Conibear Shell House, home of today’s Husky crew teams, where a recent on weeknights, the speakers pumped out 80s pop hits to an audience of none.

Keep kissing the water beyond the crew meeting place; a path leads past Conibear and connects to Canal Road Northeast just beyond the building. Follow the gravel path and water to Wahkiakum Lane – there a wooden bridge goes straight into the Union Bay Natural Area, while our path veers left into… a parking lot.

You will want to walk between the football stadium and the track, cross the parking lot and take the pedestrian bridge over Montlake Boulevard. Immediately past the bridge is the Burke-Gilman trail, so look both ways lest you lose a fight with a bike.

This final half-mile stretch of the boardwalk features a vertical rise of about 150 feet over several flights of stairs, so take off that jacket if you sweat quickly. (No judgment, I took mine off.) At the top of the last set of stairs, cross East Stevens Way and continue up another block. Turn left, walking between the Communications Building and Clark Hall, and you will be greeted by the School of Music.

Beyond that is the Quad, which in the spring is its own kind of symphony. Or maybe a circus. On my recent ride, when the Quad was teeming with visitors in the late afternoon, the flower viewing experience was much more peaceful and no less mesmerizing at dusk.

Anyway, take an extra turn or two to admire the flowers – in a few weeks they will be gone until next year.

Chicago gas card giveaway is nothing but an expensive gimmick