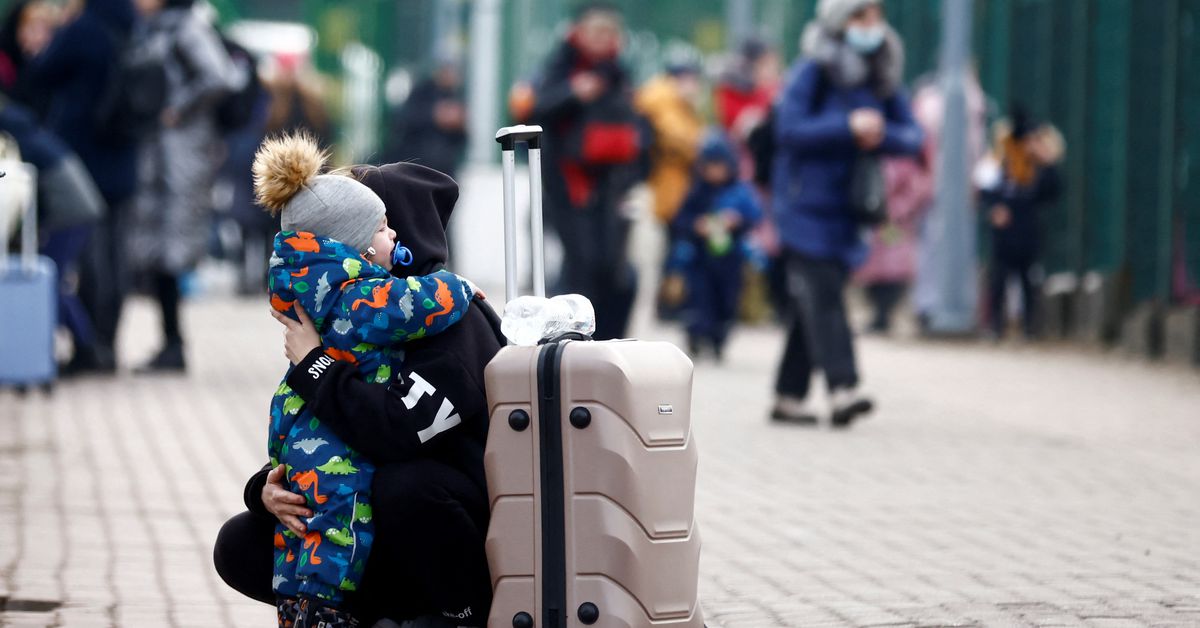 Fearing for loved ones back home, Ukrainians flee borders

Her husband stayed behind to fight while she, their two teenage boys and 10-year-old son headed west to safety.

“Our town, Malyn, is now bombed, planes are destroying houses. Our relatives stayed behind,” she told Reuters as they waited for a bus to take their group to Poland.

“Last night their house was bombed, we have no connection with them. We don’t know if they fled.”

After leaving Malyn, the family traveled to Vinnitsya, southwest of Kyiv. “Then (the fighting) started there too, so we decided to flee the country,” she said.

The UN refugee agency said on Thursday that one million people had fled Ukraine in the week after Russia invaded the country.

Moscow says the purpose of its “special military operation” is to disarm its neighbor and capture leaders it calls neo-Nazis and a threat to its own security.

The Kremlin dismissed claims of strikes against civilian targets and on Thursday Russia and Ukraine agreed on the need for humanitarian corridors to help civilians escape.

However, the United Nations Office for the Coordination of Humanitarian Affairs said on Friday that it had not received any official written communication from Russia or Ukraine for assistance in establishing safe passage for the civilians and supplies.

Thousands more Ukrainians sought refuge in neighboring countries on Friday as fighting at home escalated, receiving help from an outpouring of popular support from central Europe eager to help their neighbours. Read more

At the Sighetu Marmatiei crossing point on the Ukraine-Romania border, women and children arrived by car, bicycle and on foot on Friday, clutching plastic bags and wheeled suitcases as snow was falling.

A woman wiped away her tears as she hugged a loved one who was waiting for her.

In Poland, some 800 orphans evacuated from Odessa, Kharkiv and other parts of Ukraine were due to arrive later Friday, in addition to the 1,000 orphans already rescued, said the head of a Polish non-governmental organization helping to coordinate their evacuation.

“The places where they can be accommodated in Poland are scattered across the country, and children in an orphanage should not be separated from each other,” Aleksander Kartasinski, head of the NGO Happy Kids, told Reuters.

“I do my best to keep them together.”

Polish bus operators provided 17 vehicles that would transport them for free, he said, in another sign of the sense of camaraderie in central Europe, where memories of Russian rule after World War II run deep.

Some 73% of Poles pledged to help Ukrainians, mainly by donating food and hygiene products, according to a poll by pollster IQS for the daily Rzeczpospolita on Friday. Only 7% of respondents said they would not consider helping at all.

In Bulgaria, owners of hotels on the Black Sea coast and small guesthouses across the country offered Ukrainian refugees free accommodation, while state-owned rail operator BDZ said they could travel free in the country.