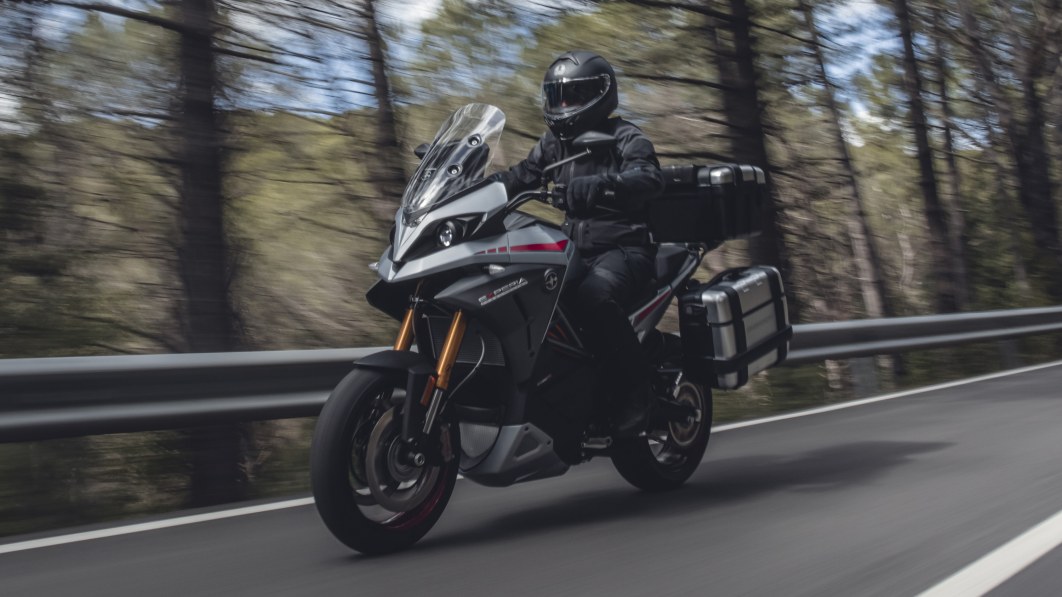 Italian electric motorcycle brand Energica Motor Company of Modena has been busy since the last bike it introduced in 2016. It was the Eva, a naked version of the Ego, which had a maximum range of 124 miles in mode Eco and cost $34,000. Since then, Energica has become the sole supplier of MotoE World Cup bikes (until 2023 when Ducati takes over), overhauled its entire range, created the Energica Inside division to help other bike makers with electric powertrains, and was privatized through one bought by Ideanomics last year. Oh, and the current Eva not only has a maximum range of 261 miles, but it starts at $23,800. Progress continues with the brand’s fourth bike, the Experia “GreenTourer”.

It is probably called a green tourer so that no one will be confused by the appearance of the adventure bike. Although not designed for off-roading, the Experia comes straight out of the adventure segment with its fairing, windshield, trio of hardside cases and Pirelli Scorpion Trail II tires. But the Experia is meant to move from place to place on the pavement and in the comfort of an adult.

Everything about the bike is new, from the tubular steel trellis frame to the battery, engine and panels. The 22.5 kWh lithium polymer pack provides 19.6 usable kWh, good for a range of 261 miles in the city, 130 miles on the highway and 160 miles in mixed driving. With the ability to charge on Level 1 and Level 2 chargers, as well as Level 3 DC fast charging stations, the Experia can top up to 80% empty battery in 40 minutes using the latter option. The redesigned pack is lighter and slightly taller than packs on Energica’s other bikes, and it powers a new motor that weighs 22 pounds less than motors on street rides. Weight savings throughout the Experia means it hits the scales at the same 573 pounds as the bare Eva. Engine output is 80 continuous and 101 peak horsepower, along with 85 pound-feet of torque, motivating the Experia from 0-60 in 3.5 seconds on an electronically limited top speed of 112 mph.

Brembos does the job of slowing down 17-inch cast-aluminum wheels. The front carries two 13-inch rotors squeezed by four-piston calipers, the rear gets a single 9.5-inch rotor and a two-piston caliper.

There are seven drive modes accessible on the five-inch cockpit color display, Eco, Urban, Rain and Sport, as well as three customizable modes. Digital customization options include six traction control settings for ABS and Bosch cornering IMU, and four levels of regenerative braking. Other dynamic luxuries include standard cruise control, a low-speed park assist feature and four USB ports. On the manual side, the 43mm Sachs front fork offers six inches of travel and adjustable preload, extension and compression. The Sachs rear monoshock provides an additional six inches of travel via the cast-aluminum swingarm and the same adjustability.

Pricing starts at $25,880 for the launch edition in the unique colorway it offers, called Bormio Ice. This launch edition will come with the bags offering 112 liters of storage, black ergal alloy bar ends and bolts, heated grips and red detailing on the wheels. After that, the standard production bike will start at $23,750. Retail units are expected to hit US dealerships this fall.

‘I’m going to suffer’ – Ronaldo embarks on a grueling four-day, 280-mile cycling journey to fulfill his promise after Valladolid promotion