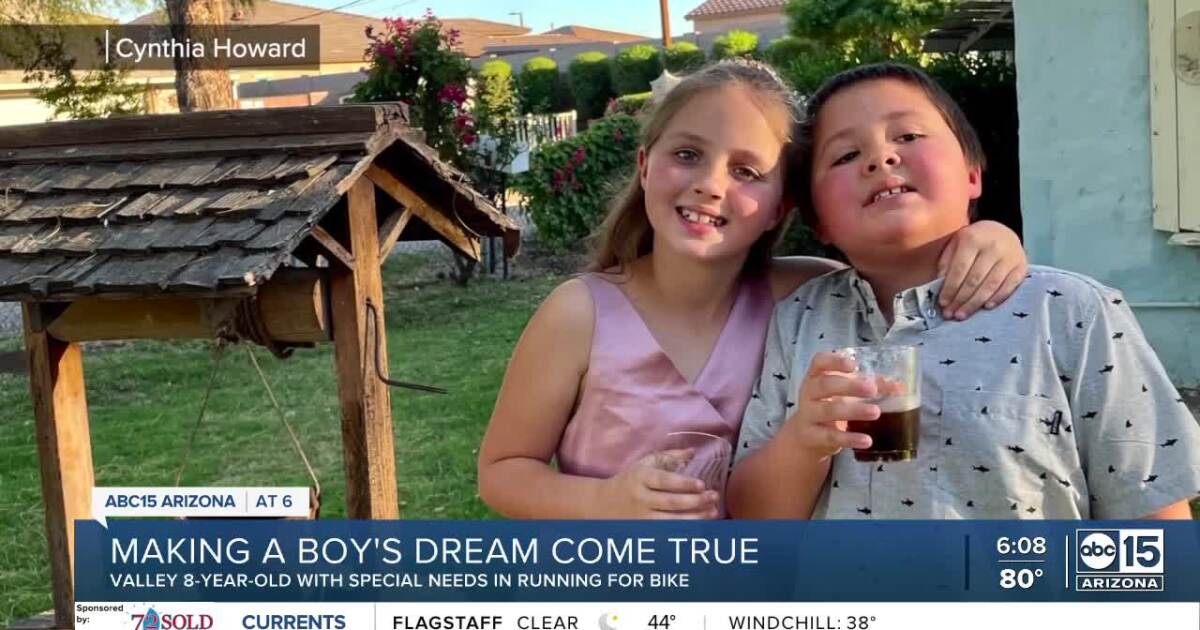 Eight-year-old asks for votes to win an adapted bike

PEORIA — For eight-year-old Carter Howard, life can be a struggle.

“He does speech therapy, occupational therapy, he’s done music therapy, food therapy, all kinds of therapy to help him be as independent as possible,” Carter’s mother, Cynthia, said.

Carter is autistic and largely non-verbal. With so much time spent in therapy, working hard to improve one’s future, enjoying the fruits of that labor is all the more important.

“He’s probably the hardest working kid, he works thirty hours a week outside of school to learn life skills, so for us it’s important he balances that with recreational activities as well. “, said Cynthia.

Carter loves swimming, dancing and just being a kid. He is particularly smitten when he sees his sister on her bike.

“She’s gonna ride a bike and she’s gonna go really fast and you’ll see him just go after her, and he’ll be like, ‘Wohoo,’ trying to catch up to her,” Cynthia said.

Unfortunately, Carter doesn’t have the motor skills to ride his. It was then that the family began looking for suitable bikes for children with special needs. Their hopes were quickly dashed when they saw the prize.

“It’s almost a car, a used car. It’s a lot of money and something out of our reach,” said Levi, Carter’s father.

Four to five thousand dollars is out of most people’s price range. That’s when they found out about Friendship Circle’s annual program great bike gift.

“It’s a competition where you can get the bike two ways, so you can win the most votes to get the bike that belongs to your particular category, or you can raise money to pay for the bike,” Cynthia said. .

The nonprofit is donating dozens of kid-friendly bikes to kids like Carter across the country, but it needs your help. Her family is creating a fundraising page, hoping you’ll find the heart to lend a hand with your votes or dollars.

“I imagine the joy. Him laughing, smiling, all of us having a great time on our bikes. Something we never got to do as a family,” Levi said. “If the community could help us in any way they can, it would mean so much to our family. You would truly make our dreams come true.”

Our favorite space-saving indoor bike rack is half the size

Simon Cowell brings wickedness to the trapeze and applauds the fall