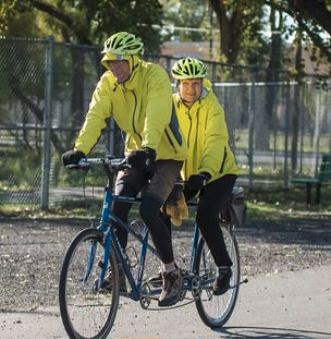 “Due to the pandemic, it has not been possible to travel and see the world. But now the world has come to us.

This is a paraphrase of a sentiment expressed by a Kansan when he described the benefits of improvements to cycling facilities in his community. These improvements have welcomed people from all over the world.

Last week, we caught up with Donna Krug, district director and family and consumer science officer for the K-State Research and Extension Cottonwood District in Barton and Ellis counties. She and her husband John live in Great Bend.

Donna grew up on a farm near the rural community of Washington, which has a population of 1,131. Now it’s rural. “We had a tandem (two-seater) bike when I was a kid,” Donna said. After she and John got married and had kids of their own, they also rode bikes.

“We’ve always been a family of cyclists,” Donna said. In 2000, she and John bought a tandem bicycle for themselves. Cycling has become a passion.

“We put 75,000 miles on our tandem bike,” Donna said. “We rode through every county in Kansas and each of the 48 contiguous states,” she said. Although it’s not possible to cycle across an ocean, Donna still has hope of cycling in Hawaii.

Donna heard of an organization known as Adventure Cycling that designates a TransAmerica bike path. The route passed through Kansas but bypassed Great Bend. When the organization’s representative contacted the Central Kansas Partnership of Barton County looking for someone to do a route survey, he was told, “Contact Donna Krug. She rides a bike all the time.

Donna and John carried out the route survey, which involved measuring the width of the highway’s shoulders, assessing the quality of the pavement and noting the support services available. Ultimately this led to the route being rerouted through Great Bend.

The study also identified the need for a camping facility for cyclists. Public camping is prohibited in Great Bend city parks. However, when she and John met with the pastor of Great Bend Central Baptist Church, they discovered that the church had unused grassy land on the property and were prepared to let that space be used as a campground for the bicycles. In fact, there was already a bicycle repair station.

“It had been a (landscape) nursery at one time, so there were some nice trees for shade,” Donna said.

People have invested in improving the lot. Volunteers set up a kiosk, a bike rack, a covered shelter and an electric charging station and repaired two picnic tables. However, there was no fresh water available on site.

One day, John and Donna went on the Great Bend Friday Night Community Bike Ride. “Let’s show everyone the new campground,” Donna said. When they stopped there, it caught the attention of another biker who had recently lost his son to suicide.

“They need water here,” the rider said. “I wonder if we could drill a well? »

In the end, the cyclist was able to use funds from his son’s memorial, his family and the suicide prevention task force to drill a well that provides fresh, clean water to cyclists in the campground. .

It was a fitting and invigorating tribute to the deceased young man. Another young man had been scouting with the suicide victim. He worked at the campground as part of his Eagle Scout project.

A memorial bike ride took place afterwards to honor the memory of this young man. “Organizers ordered 150 orange t-shirts for those who would be racing, and they ran out,” Donna said. In the end, some 200 people took part. The two people invited to lead the ride were John and Donna Krug.

This campsite has become a paradise for cross-country cyclists. “Without it even being listed on Google Maps, as of August 2021 we have people from 17 states, South Korea, England, Germany, Australia and other countries,” Donna said. .

We congratulate Donna and John Krug and all the volunteers who are making a difference by contributing to this project. As John Krug later said, “The pandemic kept us from traveling the world, but this trail brought the world to us.”