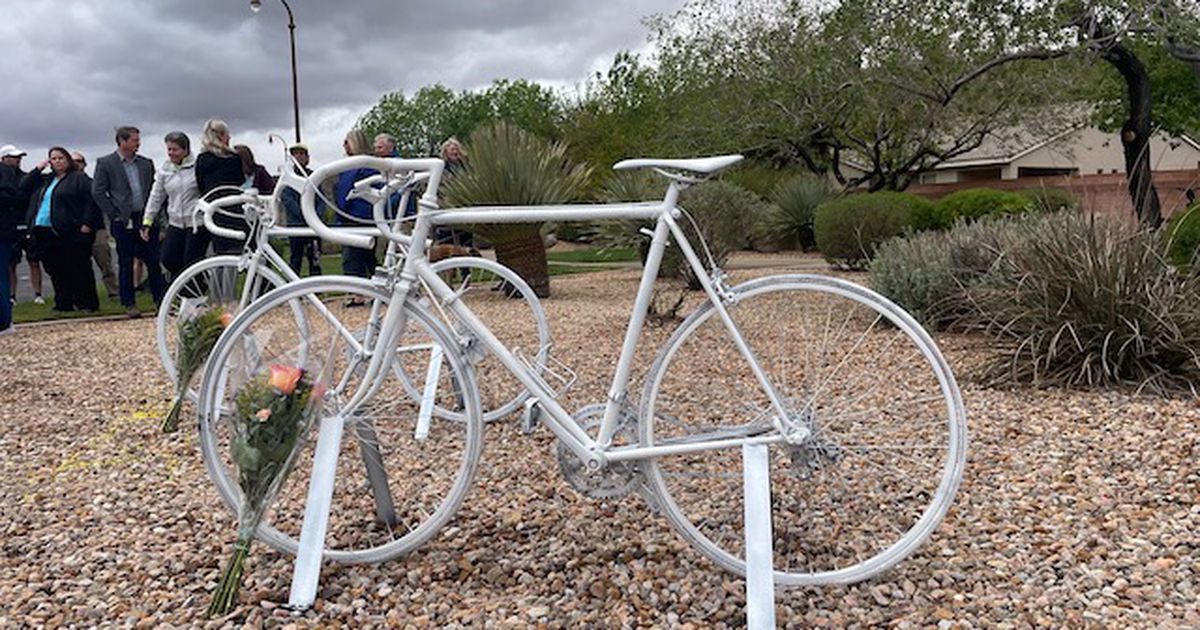 Adam Bullard and Matthew Bullard honored by Ghost Bikes after their deaths at the St. George Bike Race

The brothers were avid and inseparable cyclists, according to a GoFundMe started by their widows.

(Alastair Lee Bitsóí | Salt Lake Tribune) Two ghost bikes honor the lives of the Bullard brothers, Adam, 49, and Matthew, 48, who were tragically killed by a drunk driver in Washington on April 9. The memorial aims to raise awareness to end impaired and distracted driving in Washington County.

City of Washington • Off Telegraph St. in the Coral Canyon neighborhood of Washington City, two white “ghost bikes” adorned with colorful flowers commemorate the lives of Adam Bullard, 49, and Matthew Bullard, 48, who were killed by a driver under the influence on April 9.

The Bullards, who were from California, were participating in the Spring Tour of St. George bicycle race when Julie Ann Budge, 47, struck and killed them in her vehicle, according to the Washington City Police Department.

Ghost bikes are roadside memorials that depict cyclists killed or seriously injured by vehicles. Painted white, they are similar in concept to the crosses commonly seen along the sides of roads.

Budge is charged with multiple criminal charges, including two counts of motor vehicle homicide, two counts each of driving under the influence and failure to remain at the scene of a fatal accident, according to court documents. She also faces one count of reckless driving and failing to obey a lane of traffic.

Court documents show Budge was convicted of a DUI in 2015.

A preliminary hearing for Budge is scheduled for May 9 at 9 a.m. at the St. George Courthouse. She is being held without bond at the Purgatory Correctional Facility in Hurricane.

At the intersection where they were struck, the mayors and council members of Washington City and St. George, along with members of the Southern Utah Bicycle Alliance and the Washington County Police Department, met with approximately 50 members of the public to honor the brothers with the ghost bikes.

Washington Mayor Kress Staheli said the commemorative bikes remind drivers to share the road with cyclists, runners, walkers and scooter riders. Staheli told the Salt Lake Tribune that the city is prioritizing recreation, like bicycling, as it grows.

“These bikes represent two lives lost to impaired and reckless driving. These bikes are a reminder that life is fragile,” Staheli said. “They exist to tell us to slow down, hang up the phone, stop texting, and never drive while impaired by any type of drug, medication, alcohol, or similar substance.”

“I hope these bikes will allow people to recognize not only impaired drivers, but also distracted drivers,” said St. George Mayor Michele Randall.

” We are growing. Our roads are busy. And we must share them not only with cars, but also with pedestrians and cyclists. And we hope that never happens again in our county,” Randall said.

As a member of the Southern Utah Bicycle Alliance, St. George Councilwoman Dannielle Larkin said the alliance was formed 10 years ago to ensure roads are built to standards that include the cyclists.

“Cars are such a blessing in our lives. And they quickly become a curse when someone decides to use them irresponsibly. We are better than that in Washington County, we can do better and we will do better,” she said.

The brothers were avid and inseparable cyclists, according to their families, who have since created a GoFundMe for Sharon Bullard and April Bullardthe widows of the deceased brothers.

Sara Porter rode her bike to the memorial in part to offer support to cyclists riding the streets of Washington City. She said drivers need to give cyclists space and patience.

“I’m worried about getting hit by cars in the city,” Porter said. “Traffic got crazy and lots of distracted drivers, out of town drivers, and I don’t always feel safe on the roads.”

The brothers’ funeral was held in California on Saturday.