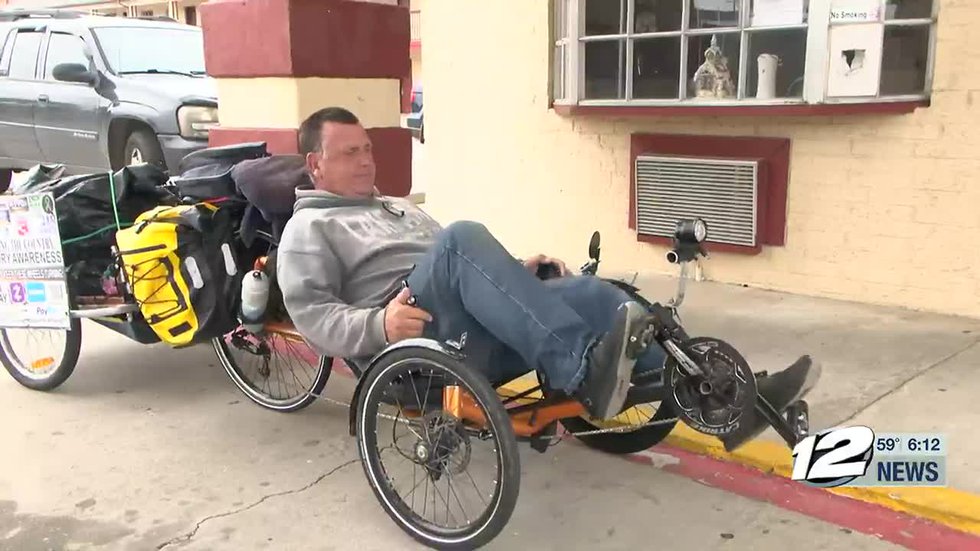 SHERMAN, Texas (KXII) – “What a day, what a day, I had the wind in my back, the sun in my face,” said biker William Galloway as he approached the Texas border from New Mexico.

“Traffic beeps me sometimes,” Galloway said. “It must be too sexy on my bike.”

He hasn’t always lived his life at full speed on the side of the road.

Seventeen years ago, his world stopped.

He said a drunk driver hit him and he suffered head trauma.

“It’s so frustrating because I wanted to go after the guy who hit me, go after the system,” Galloway said. “I didn’t ask that off the side of my head.”

He said the next ten years felt like a constant battle as he went from hospital to assisted living to a group home.

Eventually, he said he lost his job and struggled to find another.

Then he decided to go back to what he loved before the accident.

“I’ve been a bike enthusiast since I was a kid,” Galloway said. “I love bikes.”

He never looked back.

“I jumped on a bike and realized I needed more stability, so I ended up with this trike that I have now,” Galloway said.

It’s been five years since he first hit the road.

He crossed the country not once, not twice, but twelve times.

And with every mile, he said he wanted to support other traumatic brain injury survivors.

“Sometimes they’re about to give up just because they want their life back,” Galloway said. “And that’s what hurts. That’s what hurts me too. If anyone knows someone like that, give them the benefit of the doubt. Understand what they are going through, what they didn’t ask for.

He’s raising money on GoFundMe, PayPal and Venmo to fix his bike and pay for overnight tickets.

In the meantime, he said his next stop was Big Cabin, Oklahoma, outside of Tulsa.