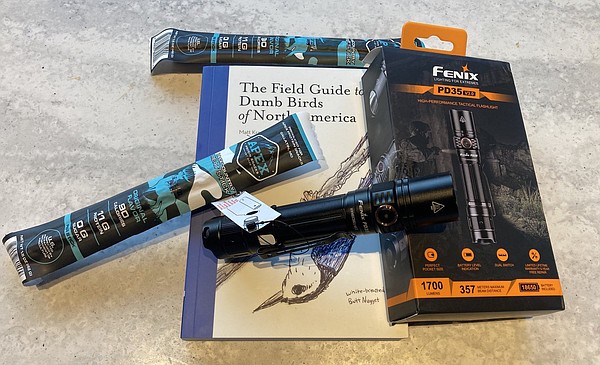 A guide to Christmas

Christmas is the time to buy something special for the outdoor people in your life or for yourself, and this year is a fertile year for some awesome new items.

Remember when the Mag Lite was the ultimate flashlight, especially the riot version that required half a dozen D batteries? If you dropped it from a deer stand, it left a crater. Flashlights have come a long way since then. They are much smaller and brighter.

The best I have found so far is the new Fenix ​​PD35 V3.0. This is a high performance tactical flashlight, but it is suitable for any situation.

Only 5.25 inches long and weighing just 3 ounces, it produces an astonishing 1,700 lumens from a Lunimus SFT40 Light Emitting Diode (LED). The owner’s manual states that the maximum beam distance is 357 meters, or 1,171 feet. It’s just under a quarter of a mile. A rechargeable 18650 battery provides the power. You can also use two CR123 batteries.

The body is black anodized aluminum with an integrated clip for a belt or shirt pocket. It also comes with a Cordura belt holster with velcro flap, as well as a lanyard. The unit also has a power meter for the battery, a charging cable and a spare O-ring.

The impact resistance is 1 meter and the lamp is classified as submersible. All of these features make the Fenix ​​PD35 ideal for caving and other activities requiring extended light availability.

There are many great bird identification guides out there, but after a day in the field with The Field Guide to Dumb Birds of North America, you’ll never watch birds or birding the same way again. .

Written and illustrated by Matt Kracht, The Field Guide to Dumb Birds of North America offers an irreverent and contradictory perspective on the common birds that fill our worlds with song and color. Be forewarned that this book is rated R for language. Kids will love it for all the wrong reasons.

Kracht is not attached to the vocalizations, habits and lifestyles of birds. Most of her descriptions are not printable in family media, which made us laugh out loud as we flipped through her pages at Domestic Domestic on Kavanaugh Boulevard.

“This is the greatest bird book of all time!” shouted the manager from across the store. He knew what I was looking at just from where I was standing. “I often give people who come here a copy and tell them to read a page. Any page. It doesn’t matter. You can’t read a single page without laughing. They almost always buy it.”

Kracht identifies each species with an unofficial name, most of which is not printable. The most tame is the mallard, which he calls the Dullard. The common name is in parentheses in smaller type below. There are also no pretentious Latin names.

He likens the plumage of the pine siskin to dirty underwear. Its description is more detailed, but we will leave it there. Its weight puts the mallard to shame for its gluttony of white bread in community ponds. He also mocks the western bluebird for his infidelity and promiscuity.

Kracht takes offense at the traditional description of the song of the sparrow, which is often compared to the overture of Beethoven’s Symphony No.5. Kracht says she has more in common with the opening of “Ice, Ice Baby!”

“So maybe you sparrow lovers can put your opera glasses and top hats away and put them down a notch, okay?” Kracht urges.

It’s a different tone to describe birds in layman’s terms, but between the lines the reader quickly understands that Kracht is a shrewd and observant bird watcher, a term he hates. In a section titled “The Difference Between Bird Watching and Bird Watching,” Kracht wrote: “Until recently there had been no debate about the difference between the terms because people Rationals generally agreed that you can’t just turn a noun into a verb because you want to, and so the terms “birdwatching” and “ornithologist” didn’t exist. Sadly, those days are over. “

Frankly, we suspect Kracht is a pen name. It sounds too much like “Cracked”, an apt name for a malcontent. We have some experience in this area, having ourselves published a few dozen magazine articles under the name Jacques Strappe.

Either way, you need this book if you want to lighten up your bird watching. It’s well worth $ 16, but be careful not to leave it where grandchildren will find it.

Oh, and don’t skip the intro. He explains everything.

Processed snack sticks are a staple for duck blinds and deer stalls. The selection is extensive, but Backcountry Meat Sticks by Apex Protein Snacks is a worthy addition to the line.

Above all, they are delicious. They are not excessively salty, they are lean and lack the shiny and oily surface of similar products, which surely has a reducing effect on our lifespan.

Second, they seem to be made of better things than most retail snack sticks. The ingredient list is short and devoid of the multisyllabic chemicals that make up many foods in this category. Beef, water, game, sea salt, dextrose, corn syrup solids, citric acid, spices, garlic, onion and sodium nitrite. That’s it.

One stick weighs 1.5 ounces, contains 90 calories, 11 grams of protein, and no sugar. Dextrose is technically a kind of stealth sugar, but it’s not worth arguing. We only know that Apex Meat Sticks taste great and we don’t regret eating them as we do many other products like this.

Phil Gaimon + Professional racers were almost hit by speeding drivers overtaking in blind turns; Rate this bike path … where is the best (+ worst) infra in Britain; Nico Roche is going to dance; Great shark on bike + more on the live blog