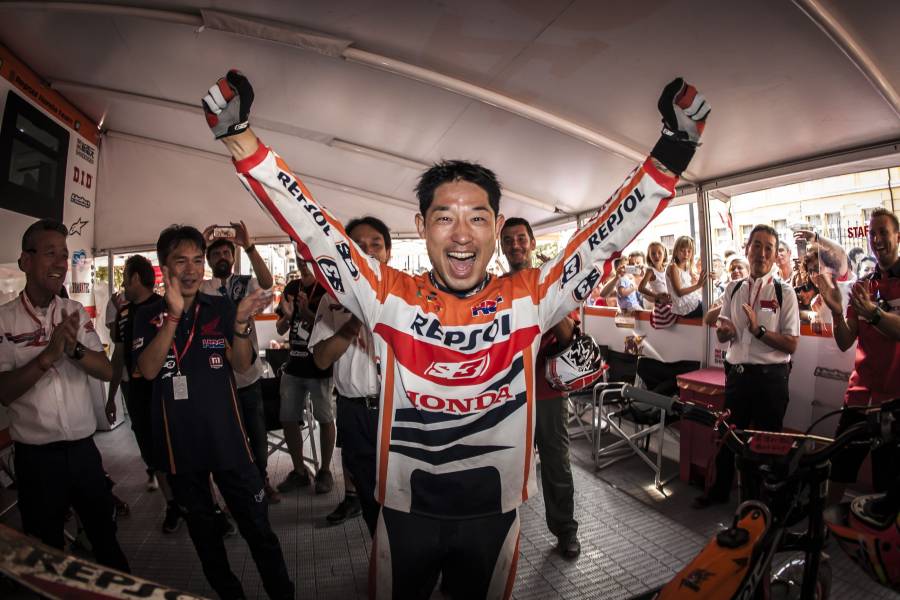 In 2005, Fujinami’s bike number not only rose to number 1, but he would compete on the all-new COTA4RT (Honda RTL250F), just released on the market. The worldwide movement towards cleaning exhaust gases has led test motorcycles to switch from 2 to 4 stroke engines. The three riders of the Repsol Honda team, Takahisa Fujinami, Dougie Lampkin and Marc Freixa, were leading the trend in the world championship, on their brand new 4-stroke motorcycles.

1996, when Fujinami first entered the World Championship, was the year the COTA 315R (Honda RTL250R) prototype was completed, and development continued until 2004. Fujinami led this bike from the prototype to its final year. Final retail model specifications for the COTA 4RT (Honda RTL250F) were finalized during the 2004 season, and development of the racing bikes that Fujinami and his teammates would ride began in earnest after the season ended. 2004. A brand new bike, the switch from a 2 to 4 stroke engine, and the stress of the defending champion. Fujinami and his No.1 bike had a whole new challenge.

The newly crowned Fujinami had the potential to defend his title. But, on a bike that had more maturity ahead of him, Fujinami had a tough season. Many spectators wanted to see Fujinami defend his title, and Japanese fans eagerly awaited his triumphant return in the Japan trial. With such high expectations, Fujinami is doing its best. The Japan trial is Fujinami’s fluke. The cheers of the crowd with each of his movements give him more strength.

The 2005 and 2006 seasons were hotly contested, but Fujinami finished second in both years. Injuries and health issues kept Fujinami from reaching his full potential, but even then he was Adam Raga’s sole challenger. Fujinami won seven rounds over the two-year span.

2007 changed everything. Toni Bou has arrived. Although new to the COTA 4RT, Bou won the indoor championship and then virtually dominated the outdoor championship to claim his second title the same year. Fujinami, the team’s ace rider and more experienced in the world championship, was shocked. Winning the world championship requires more than an extraordinary technique. The depth gained with experience is also a prerequisite, which Fujinami has accumulated for a long time. But Bou was the newly crowned champion on his first try. 2007 became the first year of seven that Fujinami did not win a single round.

Bou had become Fujinami’s teammate and his fiercest rival. Fujinami trained hard to beat Bou. In some areas, Fujinami had the upper hand. In others, Bou was superior. Fujinami learned what he could from Bou and stole the techniques he could. This, however, led Fujinami to almost lose his own riding style.

Without a win in 2007, Fujinami decided to stop chasing Bou’s style, but to improve his own. Bou is Bou. Fujinami is Fujinami. In 2008, Fujinami won his first victory in two years. Since then, his world ranking remained at number 3 until 2011. For thirteen years since 1999, Fujinami has been ranked third or better at the world championship.

During such a long career, many young riders become challengers. To stay on top, these challengers must be beaten. In 2012, Fujinami’s ranking fell to fifth place, which he maintained until 2015. During this period, he reached the podium several times and won the 2013 Japanese event. Winning a GP testing is certainly not easy. Among the riders still in contention, only Jeroni Fajardo, Albert Cabestany and Jaime Busto, apart from world champions like Fujinami, have won a round. Fujigas was still going strong.

The 2013 offseason turned out to be a nightmare for Fujinami. He had torn an anterior cruciate ligament in his right knee during training. Fujinami was nonetheless determined to overcome this career-ending injury and continue in the practice competition. He wouldn’t be able to compete in the first round outdoors if he had to have an off-season operation, so he opted to train to strengthen his muscles, protecting his ligaments. Eighteen years after starting his probationary career, Fujinami believed in himself.